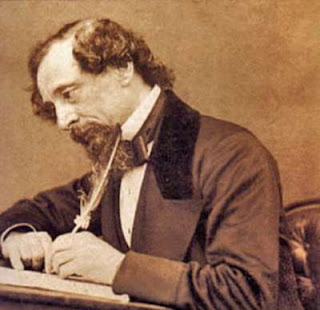 Today marks the two-hundredth birthday of Charles Dickens, the greatest Victorian novelist and one of his era's keenest social observers. While he is best known for his descriptions of 19th-century London, Dickens also wrote a famous travelogue of his 1842 trip to the United States, which included a stop in New York and a visit to the notorious Five Points.

You can read more about Dickens and the Five Points at this earlier blog post (as well as in Inside the Apple).

And if you can't get to Westminster Abbey today to visit the author's grave (where Prince Charles will be laying a wreath), you can visit the Morgan Library, where the "Charles Dickens at 200" exhibit is running for one more week.
Posted by Michelle and James Nevius at 5:52 AM