J.D. Salinger's Early Life on the West Side 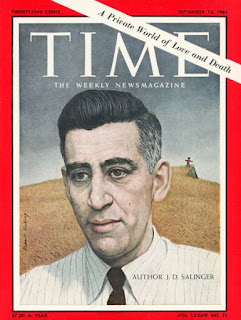 Yesterday brought the sad news of the death of J.D. Salinger, author of the classic New York tale Catcher in the Rye.
The New York Times obit mentioned briefly that Salinger had been born in Harlem, so we decided to do a little digging and found that he'd been born just south of Trinity Cemetery at 3681 Broadway (at 153rd Street). The building, Halidon Court, was built in 1910 and designed by Emery Roth, who would later go on to build such famous Upper West Side edifices as the Eldorado and the Beresford -- and another of Salinger's future homes. This handsome building still stands.
The Salinger family moved within a year of J.D.'s birth to an apartment on the Upper West Side at 113th Street and Riverside Drive. According to biographer Paul Alexander, "between 1919 and 1928, the Salingers moved three more times before they ended up in a pleasant apartment on West Eighty-second Street."

That "pleasant" apartment was at the Myron Arms at 221 West 82nd Street, then a relatively new building, which had also been designed by Emery Roth. Though Salinger moved out of the neighborhood for the Upper East Side, Salinger later attended the McBurney School on West 64th Street for two years before flunking out. The McBurney School appears in Catcher in the Rye; it's the school to which the fencing team is heading when Holden leaves the foils on the subway. (The school later moved from West 64th Street and that original building no longer stands.)

The Myron Arms is still there, however -- just across the street from Barnes & Noble -- so if you're heading in that direction to replace your dog-eared copy of Catcher in the Rye or Nine Stories, take a moment to admire Salinger's boyhood home.

Read more about the Upper West Side -- and take a self-guided walking tour -- inInside the Apple: A Streetwise History of New York City.

To get RSS feeds from this blog, point your reader to this link.
Or, to subscribe via email, follow this link.
Also, you can now follow us on Twitter.
Posted by Michelle and James Nevius at 6:45 AM