Yesterday's City Room blog at the New York Times ran an interesting piece on Mario J. Pulice’s collection of furnishings from SS Normandie, the French luxury liner. Mr. Pulice's apartment -- essentially one big shrine to the ship -- is being dismantled and sent to the South Street Seaport Museum for their exhibition DecoDence, about the ship, which opens February 18.
During World War II the ship was seized by the Americans and, while being refit as a troop transport, burned and sank on its moorings in the Hudson River. 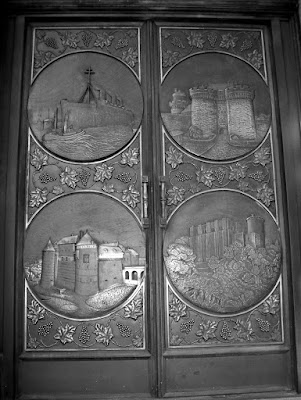 One piece of Normandie ephemera that won't be in the show: the doors from the formal dining room, which now grace Our Lady of Lebanon in Brooklyn Heights.
* * *

Read more about SS Normandie inInside the Apple: A Streetwise History of New York City.
To get RSS feeds from this blog, point your reader to this link.
Or, to subscribe via email, follow this link.
Also, you can now follow us on Twitter.
Posted by Michelle and James Nevius at 6:33 AM