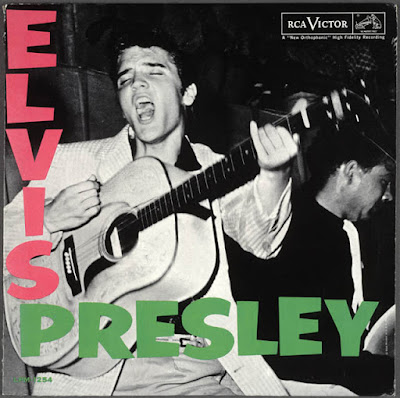 Friday marks what would have been the 75th birthday of the King of Rock and Roll, Elvis Presley, who was born January 8, 1935, in Tupelo, Mississippi.
Though most associated with Memphis -- where Elvis and family moved when he was 13, where he cut his first, influential Sun Records tracks, and where he later lived in the mansion/shrine Graceland -- the King had an important relationship with New York City, especially during the earliest part of his career.
Elvis first came to New York on March 23, 1955 to audition for Arthur Godfrey's Talent Scouts, a CBS program that showcased unheralded talent. Though he had already cut his first single, "That's All Right"/"Blue Moon of Kentucky," for Sun, Elvis was virtually unheard of outside the south and was still mainly playing the high school concert circuit. The trip to New York was his first plane ride. Elvis and the other two members of his trio (Scotty Moore and Bill Black) spent the day sightseeing before the audition, which took place at Godfrey's offices at 501 Madison Avenue.
The audition did not go well -- Elvis was nervous and deemed too outlandish for Godfrey's mainstream audience -- and the next night the trio was back on stage in the Marianna, Arkansas, high school auditorium. (The one bright spot of the trip was seeing Bo Diddley, one of Elvis's idols, perform at the Apollo in Harlem.)
Just a few months later, however, Presley returned to the city. Now fully under the management of Colonel Tom Parker and under contract to RCA records, Elvis returned in November 1955 for a round of publicity photos and in January 1956, he was back again to make his first national television appearance on The Dorsey Brothers Stage Show, where he performed "Shake, Rattle & Roll"/"Flip Flop and Fly" and "I Got a Woman." 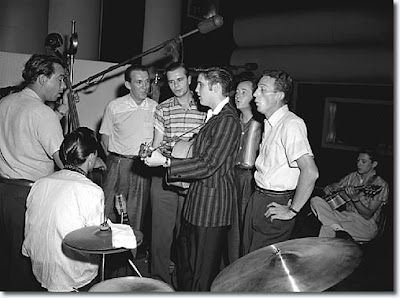 Elvis in the RCA Studios, July 1956
But perhaps the most important contribution New York made to Elvis's early career were the tracks he cut at the RCA Studios in January, February, and July 1956. On January 30, the King reported to the studios at 155 East 24th Street (now, sadly, demolished) and over the next two days recorded a string of songs that would appear on his debut album, including the hit "Blue Suede Shoes."
In February (after another Dorsey Brothers appearance), Elvis returned to 24th Street to cut "Lawdy Miss Clawdy" and "Shake Rattle & Roll." Then on July 2, he cut one of the biggest singles of his career: "Hound Dog" and "Don't Be Cruel." In the six months since his first national TV appearance, Elvis's popularity had skyrocketed. Moreover, he'd become both confident and meticulous in the studio: "Hound Dog" took 31 takes to perfect and "Don't Be Cruel" was recorded 28 times. (Granted, in the days before overdubs almost all playing was "live" in the studio and the only way to rectify a mistake was to start from the beginning.)
When "Don't Be Cruel"/"Hound Dog" was released it spent 11 weeks at the top of the charts and Elvis was a certified phenomenon. In September he appeared on Ed Sullivan -- his first number famously shot so that the TV audience would not see his swiveling hips -- and the program brought in an 82.9% share of the television audience.
While Presley would return to New York later in his career, most notably for concerts at Madison Square Garden in the 1970s, he never recorded another track here.
Don't Be Cruel - Elvis Presley

Interested in more Rock and Roll history? Take our NYC Rock and Roll audio tour -- hosted by famed DJ Ken Dashow -- and produced by our partners at CityListen.com

Read more about New York in the 1950s in
Inside the Apple: A Streetwise History of New York City.