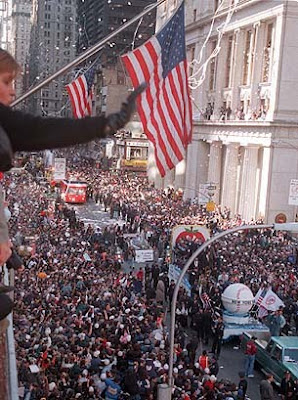 Anyone who’s read our book or this blog knows we have a thing for ticker tape parades. So, of course we are excited for tomorrow’s parade honoring the New York Yankees 27th world championship. It will be a record-setting ninth parade for the Bronx Bombers. However, while many people associate ticker tape parades with winning sports franchises, honoring the local teams is a relatively modern development; the Yankees didn’t get their first parade until 1961.

The first ticker tape parade was held in 1886 in honor of the opening of the Statue of Liberty, but the parades did not become a regular occurrence until the beginning of the 20th century. The first sports-related parade was August 6, 1924, honoring the U.S. Olympic team (featuring three-time gold medal winner Johnny Weismuller) returning from the Paris games. Two years later, golfer Bobby Jones got a parade (the first of two) as did the first woman (Gertrude Ederle) and the first mother (Amelia Gade Corson) to swim the English Channel.

Baseball did not get its first parade until Connie Mack was honored in 1949 for his remarkable 50-year career as the manager of the Philadelphia A’s.* When the Giants won the National League Pennant in 1954, they were the first local team to be given a parade; but why the Dodgers or Yankees did not get one the next year (or the year after that) when they faced off in the World Series remains a mystery. Indeed, the Yankees were in the World Series every year from 1955 to 1958 with no recognition. In 1960, the Yankees won the pennant -- but lost the series to the Pirates, but at the beginning of the next season they were honored with a parade up Broadway. (Perhaps the only time a team has been thrown a parade for not winning the World Series.) That parade was perhaps as good omen, as the 1961 season featured the Roger Maris-Mickey Mantle home run contest and a victorious trip to the World Series. The team was honored again at the start of the 1962 season for having won the World Series. (There is some question as to whether this was a true parade; the Yankees were certainly honored at City Hall. Did they also ride up Broadway in a motorcade as they'd done the year before? We're still searching....)

If you go to the parade, which begins at 11:00 a.m. check out the plaques embedded in the sidewalk. They list everyone who has ever been honored with a parade and stretch from Bowling Green Park to the foot of City Hall Park.

* Correction: An astute reader points out 1949 would have been Mack's 49th anniversary as the A's manager. The official sidewalk plaque states that the parade was to honor Mack's 50th anniversary, but looking back now at the press coverage, that was not the intent at the time. In truth, the parade honored Mack's lifetime contributions to baseball (he'd been a player and manager for 65 years). The next day, August 20, 1949, was "Connie Mack Day" at Yankee Stadium and Mack was honored again at the stadium.

Read more about ticker tape parades in Inside the Apple: A Streetwise History of New York City.

Posted by Michelle and James Nevius at 6:14 AM