The Manhattan Company vs. the Chrysler Building 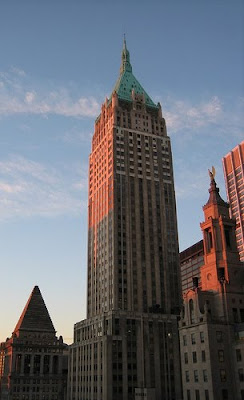 The Bank of the Manhattan Company by CR on flickr.
A couple of weeks ago, there were a number of commemorations of the 80th anniversary of the Great Crash of 1929 which led to the Great Depression. As the stock market was plummeting, however, buildings in the Financial District were still soaring to new heights, including the Bank of the Manhattan Company at 40 Wall Street, which was racing against the Chrysler Building on 42nd Street to be the tallest building in the world.
Eighty years ago today--on November 12, 1929--the Manhattan Company finally topped out at 925 feet. As far as anyone knew at the time, that meant it was the tallest building in the world. (The New York World, reporting the day's events, noted that it had bested the rival Chrysler Building which only stood at 808 feet.)
But the news of the Manhattan Company topping out was overshadowed by a construction accident an hour before the ceremony. In front of a large crowd of spectators, a half-ton block of limestone that was being hauled up the building broke free from its harness at the 35th floor. The huge stone tore through the 8th-floor setback and through three more stories of steel and concrete before stopping at the fifth floor. Debris rained down onto Wall Street; one piece struck Helen Pratt, who was waiting in a car parked across the street. She was only slightly injured and insisted on being taken home and not to the hospital. One of the building's construction workers, James Bellis, was injured by a piece of falling scaffolding and taken to the hospital but was ultimately fine.

The accident so overshadowed the reason people were there -- to see the building's last piece of structural steel hoisted into place -- that the New York Times didn't even bother reporting on the building's completion. Indeed, those news outlets that did proclaim 40 Wall Street to be the "world's tallest tower" were in for a rude shock. Just four days later, it was revealed that the Chrysler Building was not 808 feet tall as previously reported, but that its spire--hoisted into place on October 23--was its crowning architectural element, bringing its full height to 1,046 feet. That not only made the Chrysler Building significantly taller than the Manhattan Company, it also made it taller than the Eiffel Tower and thus the tallest structure in the world.
After the Bank of the Manhattan Company merged with Chase in 1955 to become Chase Manhattan, the skyscraper at 40 Wall went through a succession of owners, including at one time Ferdinand and Imelda Marcos. Donald Trump purchased the dilapidated tower in 1995 for $1 million and emblazoned his name in large, shiny letters across the front, thus causing all sorts of tourists to think it is Trump Tower and might be full of wanna-be apprentices. Trump has tried to sell the building at least once but has yet to find suitable buyers.

Read more about this skyscraper race, the Great Crash of 1929, and New York during the Depression in Inside the Apple: A Streetwise History of New York City.

Posted by Michelle and James Nevius at 10:29 AM

Just to go further back in history, The Manhattan Company was formed by Aaron Burr, officially to supply New York with water, but mostly so that he could start a bank, the second in the state, after Hamilton's Bank of New York.