Happy Birthday, Billy the Kid -- Outlaw from the Lower East Side 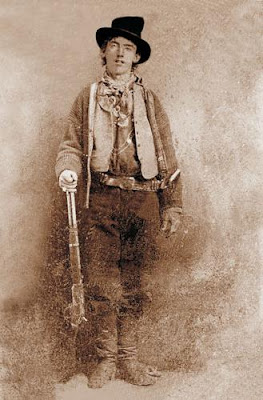 Today -- November 23rd -- either is (or isn't) the 150th birthday of Wild West outlaw Billy the Kid who either was (or wasn't) born on the Lower East Side at 70 Allen Street.
Very little is known about Billy the Kid's early life -- even his birth name remains a mystery. During his short life he went by many aliases, most notably William H. Bonney, but it seems likely he was born William Henry McCarty. His mother, Catherine McCarty, probably immigrated to New York during the Irish Potato Famine; during the worst year of the famine, 1847 -- "Black '47" -- over 200,000 Irish arrived in New York City.
Many authors cite 70 Allen as Billy the Kid's birthplace, but scant evidence ties him directly to the Lower East Side. In 1848, Doggett's New-York City Directory lists 70 Allen as the place of business of a cloth dyer named Thomas Smith, who lived next door at 70-1/2 Allen. An 1860 directory also lists a dyer at that address. Could No. 70 have housed residents? Anything would have been possible in the burgeoning Irish neighborhood.
By the 1870s, 70 Allen was part of E. Ridley & Sons, the noted department store. (We covered the bizarre murder of Edward Ridley earlier this year.) The building no longer stands; it was destroyed during the widening of Allen Street in 1931-32.
The date of Billy the Kid's birth is even hazier. November 23, 1859, first appears in the The Authentic Life of Billy, the Kid, a book written by sheriff Pat Garrett, Billy's eventual killer. However, Garrett's co-author, Ash Upton, was also born on November 23. Coincidence? Or did Upton, not knowing Billy's actual birthday, simply substitute his own? Unless some new evidence turns up, it seems like we'll never know.
How long did the family continue to live in New York? Another mystery. By 1870, Catharine McCarty and her sons are in Kansas. In 1877, Billy moved to Lincoln County, New Mexico, where he would live out the rest of his short life. He was killed on July 14, 1881; Garrett's book came out the next year and soon Billy was a folk legend and a powerful symbol of the Wild West.
The Billy the Kid story has been told countless times, perhaps never more powerfully as in Sam Peckinpah's 1973 film, Pat Garrett and Billy the Kid:

Billy the Kid's story is a good reminder that while New York was the largest port of entry for immigrants in the 19th century, many of those families only made the city their home for a short time before heading west.

Read more about Irish New Yorkers in the 19th century in
Inside the Apple: A Streetwise History of New York City.

I had absolutely no idea that Billy the Kid was born in the New York, I associate him so much with the West.

Same here. Is there a concrete evidence of his birthday and birthplace? That's what I love about Billy the Kid - he's life is full of mystery.