I was sitting in mcsorley's. outside it was New York and beautifully snowing.

Inside snug and evil. 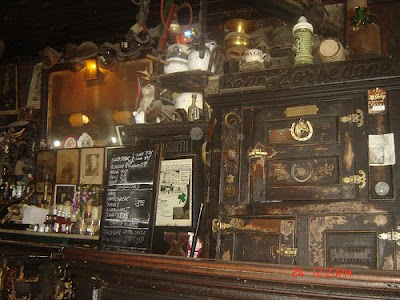 McSorley’s, the venerable old Irish saloon on East 7th Street, gets a little older today as it turns 155.

Over the years there has been great debate as to whether McSorley’s should hold the title of New York’s oldest bar. Historian Richard McDermott has tenaciously searched out insurance maps and municipal tax registers that push the date of McSorley’s forward to 1862. The bar, in answer, points to a photograph from February 17, 1904, of founder John McSorley celebrating the tavern’s 50th birthday. But more important than the actual date is the fact that McSorley’s is a living testament to its own past. The bar still only serves one thing—its own ale—and has on the walls an eclectic assortment of memorabilia from the famous John Wilkes Booth wanted poster to newspaper headlines detailing the bar’s losing battle in 1970 to keep women out. (The bar’s former motto, “Good Ale, Raw Onions and No Ladies,” was replaced with “Be Good or Be Gone.”)

If you are in the East Village, head over for a round. If you are somewhere else raise a glass—or, to be historically accurate, two half-pint glasses—to John McSorley and his tavern.

For more about the saloon, one good place to start is Joseph Mitchell’s classic, McSorley’s Wonderful Saloon.

We also have a chapter on McSorley’s—as well as entries on other venerable drinking establishments—in Inside the Apple.

Posted by Michelle and James Nevius at 1:21 AM

Mr. Mcderm would have you believe he "tenaciously searched" records, he cherry picked the parts he liked and ignored the things that don't support his claim.

McDermott was once thrown out of McSorley's for drunkeness and has held a grudge against the saloon ever since. He's lucky they didn't call the cops, 'cause now all he does is run around claiming obscure public land records -- which we know are sooooooo accurate in the 1850's -- somehow discount contemporary accounts of the saloon being there. But what do you expect from someone who cannot understand "Be good or be gone."