Malcolm X and the Audubon Ballroom 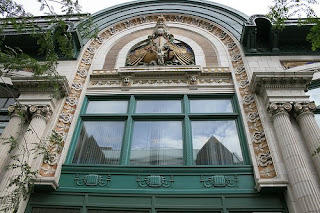 Saturday, February 21, 2009, marks an unfortunate anniversary—it has been 44 years since the murder of Malcolm X at the Audubon Ballroom in Washington Heights. You may remember from back in the early 1990s that Columbia University made headlines with its plans to demolish the Audubon Ballroom to build a biomedical research lab. This angered the African-American community and while the lab got built, then-Borough President Ruth Messinger was able to broker a compromise in which parts of the façade (pictured) and the ballroom where Malcolm X was assassinated would be preserved.

The original building was erected in 1912 and was designed by renowned theater architect Thomas W. Lamb. Planned as a multiuse building, with twenty-five stores and a mixed vaudeville/movie theater, the original budget of $1 million soon doubled to $2 million. The theater opened in November 1912 with a seating capacity of 3,400. An additional 2,800 people could be accommodated in the roof garden and an unspecified number in the ballroom.

In the 1930s, the theater was the target of at least two bombings, both of which were apparently part of a labor dispute between the Motion Picture Operators Association and the United Motion Picture Operators Union (which kind of sounds like Judean People’s Front and the People’s Front of Judea) and soon thereafter, the space was leased to Temple Emes Wozedek. By the 1950s, Washington Heights was one of the largest German –Jewish neighborhoods in the city and in 1951 the synagogue had over 1,000 families as members.

By the 1960s, the demographics of the neighborhood were changing again and the ballroom was mostly being hired out for events. On February 21, 1965, while addressing the Organization of Afro-American Unity, Malcolm X was shot in a well-coordinated attack. His home had been fire-bombed just a week earlier and he knew his life was in danger, but chose to speak anyway. A statue to the slain Civil Rights leader now stands in the lobby of the Audubon. You can visit by taking the A, C, or 1 train to 168th Street and walking three blocks south on Broadway.

More about the life and tragic death of Malcolm X can be found in our book, Inside the Apple: A Streetwise History of New York City.

Posted by Michelle and James Nevius at 2:31 PM