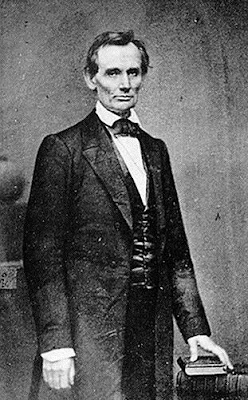 A lot of our posts recently seem to have focused on the East Village and we return there again today to celebrate the 149th anniversary of Abraham Lincoln’s “Right Makes Might” speech at Cooper Union.
Lincoln had been invited to address the Plymouth Church in Brooklyn, but the parish—led by noted abolitionist Henry Ward Beecher*—realized that the crowd would be too large for their Orange Street home and the speech was rebooked for the Great Hall at the Cooper Union. The Great Hall had opened only two years earlier and was one of the largest public gathering spots in the city.
In the speech, which historian Harold Holzer persuasively argues made Lincoln president, the “noted political exhorter and prairie orator” (as the New York Times called him the next day) forcefully laid out his case for barring the spread of slavery into the territories. Afterwards, the New York Tribune wrote: “No man ever before made such an impression on his first appeal to a New York audience.”
It was a busy day for Lincoln. In addition to the speech, he had his photograph taken by Mathew Brady. Both the speech and the photograph were distributed across the country, significantly raising Lincoln’s profile. According to McSorley’s lore, Peter Cooper brought Lincoln around for beer after the speech. This is unlikely. Instead, Lincoln went to the Athenaeum Club with some members of the Young Men's Central Republican Union for dinner.
The complete text of Lincoln’s speech can be read at http://showcase.netins.net/web/creative/lincoln/speeches/cooper.htm.

* We’ll visit the Plymouth Church in a future post.

For more about Abraham Lincoln, Cooper Union, and the city during the Civil War, be sure to pick up a copy of our book Inside the Apple.
To get RSS feeds from this blog, point your reader to this link. Or, to subscribe via email, follow this link.

Posted by Michelle and James Nevius at 2:43 AM