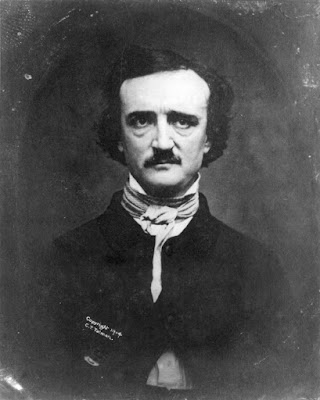 Today, Edgar Allan Poe turns 200 years old. While he was born in Boston and died (under somewhat mysterious circumstances) in Baltimore, it should really be New York that has the greatest claim on the man. In his short life, Poe produced poetry, criticism, invented detective fiction, and mastered the horror story.
Celebrate his life in New York with a trip up to Edgar's Cafe at 255 West 84th Street, which sits on the site of what was once the author's Upper West Side farm. If it's not too cold, take a detour from the cafe over to Riverside Park. The large rock outcropping you see in the park between 82nd and 83rd Streets is Mount Tom, which is said to have been one of the places Poe went for inspiration. (The cafe has plenty of warm beverages to combat a cold visit to Mount Tom.)
* * *
More about Poe in New York City will be featured in a future blog post--as well as in Inside the Apple.
Also, check out this link from the New York Times's Paper Cuts blog about Poe's work.
* * *
To get RSS feeds from this blog, point your reader to this link. Or, to subscribe via email, follow this link.
* * *
Posted by Michelle and James Nevius at 1:58 PM