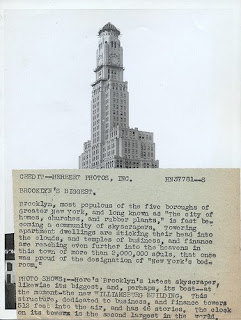 Katia over at Pardon Me for Asking, published the above photo of the Williamsburg Savings Bank, the caption of which notes that Brooklyn was "long known as 'the city of homes, churches, and rubber plants.'"
Rubber plants?
Turns out to be true. Rubber trees were a favorite of city dwellers who lacked the available light for growing flowering plants. In 1907, the New York Times noted a scourge that was hitting the borough's rubber trees (which the story referred to repeatedly as "family pets"). At the end, the short article noted:

Nowhere in the world are there so many rubber plants in captivity as in Brooklyn, and nowhere is so much affection and care lavished on these docile and harmless household pets as in the borough at the drowsy end of the bridge.

Anyone have experience with Brooklyn's famous "family pets"?
* * *
Share this story on Facebook!
* * *
To get RSS feeds from this blog, point your reader to this link. Or, to subscribe via email, follow this link.

Posted by Michelle and James Nevius at 11:02 AM

I will ask my father about this one, as he grew up in Flatbush in the 30s. The Sinatra song "High Hopes"(1959) makes it sound like rubber tree plants were well-known and popular in NYC.

Lidian (who also blogs about old NYC at http://thevirtualdimemuseum.blogspot.com)

Integrated organic and inorganic fertilization is needed to
increase the yield of crops. Fertilizer policy
is initiated based on the longterm experimental findings,
practical experience and observations.Fertilizer
recommendation for any crop is made depending on soil,
plant analytical results, yield of crops.so, reach
desired goal checked-climate,plant population,pest and
disease control measures,the critical values of
specific crop soil in specific areas.More at
www.northernfertilizer.org