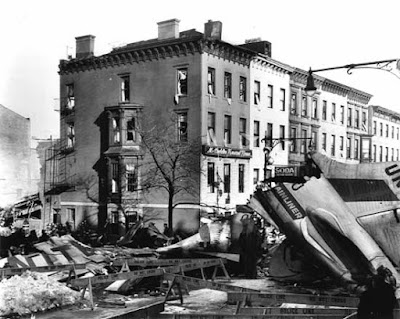 Today’s dramatic Hudson River plunge by US Airways flight 1549—with no loss of life—brought to mind a number of other airplane crashes over the years, from the 2001 American Airlines crash in the Rockaways to the B-25 that flew into the Empire State Building in 1945.

However, perhaps the worst aviation disaster in New York history was the midair collision of a United Airlines DC-8 and a TWA Super Constellation propeller plane on December 16, 1960. The United plane, en route to Idlewild (as JFK was then called), was put into a holding pattern. However, due to poor visibility, a breakdown in the plane’s communications system, and pilot error, the United plane was flying too high and off course, setting it directly in the path of the TWA flight that had been cleared to land at La Guardia.

The two planes struck each other over New Dorp, Staten Island. The TWA plane immediately fell, crashing at Miller Field, a military airstrip. However, the United Flight was still airborne (despite being shorn of its right engine and part of the wing) and began descending toward Brooklyn. Some have guessed that the pilot may have been trying to make an emergency landing in Prospect Park. However, the plane slammed down at the corner of Sterling Place and Seventh Avenue in Park Slope, destroying a funeral home and the aptly named Pillar of Fire Church.  Tragically, all 128 passengers and crew on the two planes along with six people on the ground died, making it the worst aeronautical disaster up to that time. Among the people on the ground were a caretaker of the church and a man selling Christmas trees. It is the only time such an in-air collision has taken place over a metropolitan area and—despite criticisms of how the federal government handled the investigation—ultimately led to better training for pilots and safer planes.

Though the scars have faded over the last 48 years, if you go to the intersection of Seventh Avenue and Sterling Place today, you can still see some faint reminders from the crash.

Posted by Michelle and James Nevius at 8:19 PM

Some of the scars haven't faded from this accident especially for those who lost a loved one in this terrible accident. My mother was 13 when she lost her mother in this terrible crash. Although they tell me I look like her, I never got to meet my grandmother. She was on her way to the Perkins Institute for the Blind to pick up my uncle for the holidays.