Minetta Tavern and the Reader's Digest 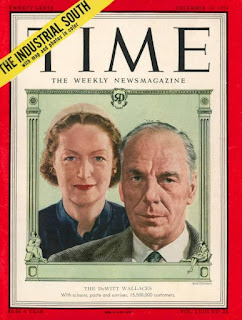 As per Eater, Keith McNally’s refit of the Minetta Tavern (at the corner of MacDougal Street and Minetta Lane) will be finished in early 2009 with at least some of the original décor intact.

The tavern was the hangout over the years for a host of literary lights, including e.e. cummings, Ernest Hemingway, Ezra Pound, and F. Scott Fitzgerald. It was also a favorite of Joe Gould—whose life was chronicled by the New Yorker’s Joseph Mitchell—who claimed to be working on his Oral History of Our Time at the bar.

Also, when the Minetta Tavern was still a speakeasy (called the Black Rabbit), it rented out its basement to Dewitt and Lila Bell Acheson Wallace who published the first issues of the Reader’s Digest there. The magazine’s entrance was rumored to be through a trapdoor in the tavern. Does that mean they shared space with the Black Rabbit’s illicit booze supply?

The first print run of the digest—limited to 5,000 copies—came out in February 1922. By 1923, the Wallaces had moved to Pleasantville, New York, which is still the magazine’s corporate home. Today, the magazine prints over 10 million copies in the U.S. alone and has scores of foreign language versions.

Photo courtesy of the new Life magazine photo archive over at Google.

Posted by Michelle and James Nevius at 3:10 PM