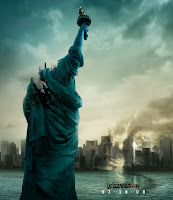 If you are the sort of person who, in these uncertain economic times, might be comforted to know that things could get much worse, tune in to the Discovery Channel tonight at 10:00 p.m.* to see New York Earthquake. This hour-long documentary examines just how bad things would be if a big quake hit New York. (The city's last big one was an earthquake measuring 5 on the Richter scale that hit back in the 1880s.)
Among the topics discussed in the program is the liquefaction of Battery Park City and other landfill, which would promptly shimmy back into the sea.
Also of interest: The History Channel is re-airing Super City: New York on Sunday, December 14. While not every segment of this program was equally good, it is still well worth watching if you are interested in the history of the city.
* Check local listings; it's on at different times in different markets.

UPDATE
Now that we've watched the show, a mini review:
It was a little disappointing--though not terribly surprising--that the show focused almost exclusively on the doom-and-gloom aspects of a major quake hitting the city. If you want advice as to what to do to prepare for the big one (or any major disaster), visit http://www.nyc.gov/html/oem/html/get_prepared/ready.shtml
It was interesting to hear about the fault that runs along 125th Street and is responsible for the deep valley there. It was also fascinating to think that those skyscrapers most badly damaged in an earthquake will be as a result, in part, of the exact size of the seismic wave that cascades under the city. Many skyscrapers' steel skeletons are built to withstand the shock of a quake (the good news). Their facades, however, are not (the bad news) and will peel off into the street.
Again, that web site is: http://www.nyc.gov/html/oem/html/get_prepared/ready.shtml
* * *
Use this link to subscribe to RSS feeds from this blog. Or, to subscribe via email, follow this link.
* * *

Posted by Michelle and James Nevius at 10:35 AM