Stone Street and the Great Fire of 1835 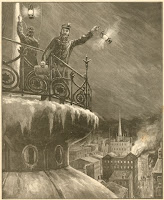 As New Yorkers enjoy the first real snow of the year, it’s appropriate to think back 173 years to the night of December 16, 1835, when a fire broke out in Hanover Square in the Financial District. Within a day the fire had destroyed 600 buildings over 50 acres earning the name the “Great Fire of 1835.” And the fire was so terrible because of the weather.

Mayor Philip Hone, one of the great diarists of New York in the 19th century, wrote:

“December 17—How shall I record the events of last night, or how attempt to describe the most awful calamity which has ever visited these United States? The greatest loss by fire that has ever been known…. I am fatigued in body, disturbed in mind, and my fancy filled with images of horror which my pen is inadequate to describe.”

When the fire broke out (evidently because of a gas leak), New York’s volunteer fire department was at the ready; most shops and houses had fire buckets available and bucket brigades stretched to the city’s wells and cisterns. There were no fire hydrants yet because the city didn’t have running water – that wouldn’t come for another 10 years and the building of the Croton Aqueduct System.

The problem was that it had been such a cold winter already that the water in the wells was frozen solid. The fire department’s new hand-pump was taken to the East River, but to no avail—the river was frozen solid, too. When the firefighters were finally able to hack through the ice, they couldn’t get any water into the hoses before it froze—it was that cold.

In the end, the fire had to burn itself out and, in the process, it destroyed much of the area between Broadway and Pearl Street in the financial district. If you happen to be down in that neighborhood and the weather’s not too lousy, take a walk down the block of Stone Street that connects Hanover Square to Coenties Slip. This is the area known today for its string of restaurants and pubs, such as Ulysses, Financier, and Brouwer’s of Stone Street. The buildings themselves, however, form a sort of memorial to the fire. Almost all of them were built within a 12-month period in 1836-37 to replace countinghouses and warehouses destroyed in the Great Fire. Notice how many of the buildings have extra wide doors (to haul in cargo) and strong, granite curbs to keep goods from accidentally plunging in to the basement.

More about Stone Street and the Great Fire of 1835 can be found in our forthcoming book, Inside the Apple, which, as always, is available for pre-order. Get your copy today!