(To see a larger view of this entire postcard, CLICK HERE.)

Today's postcard comes from the vast trove of images at the Library of Congress. Published ca. 1900, the fold-out card shows the downtown skyline. The view, looking at the west side of Lower Manhattan from the Hudson River, shows just how much has changed in the past 116 years.

The tallest building in the postcard (toward the right of this close-up) was also the tallest in the world: The Park Row building, Completed in 1899 by R.H. Robertson, the building's twin cupolas hosted the city's first paid observation deck, a feature that would become a hallmark of every future building to hold the record. The Park Row tower still stands (until recently its ground floor housed J+R Music World), but many others in that part of town are now gone, including another tallest building in the world, the headquarters of the New York World, Joseph Pulitzer's newspaper. Capped by a large dome (at the left of the above close-up), Pulitzer's skyscraper was the first building ever to boast about its height, though it was -- paradoxically -- also designed to appear short and stocky to passersby. Like much of Newspaper Row, the skyscraper was demolished to make way for the widened approach ramps to the Brooklyn Bridge. 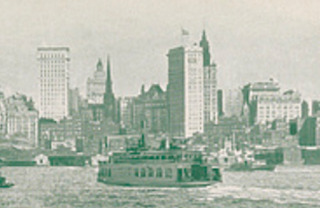 Another familiar landmark on the skyline is the spire of Trinity Church, which was also once the tallest structure in town. (It is the dark spire, above.) Just north of that you can see the American Surety Building at 100 Broadway, Bruce Price's 1896 skyscraper that still stands opposite Trinity's graveyard, though this and any other extant buildings in Lower Manhattan are impossible to see from the river today.

Posted by Michelle and James Nevius at 12:53 PM