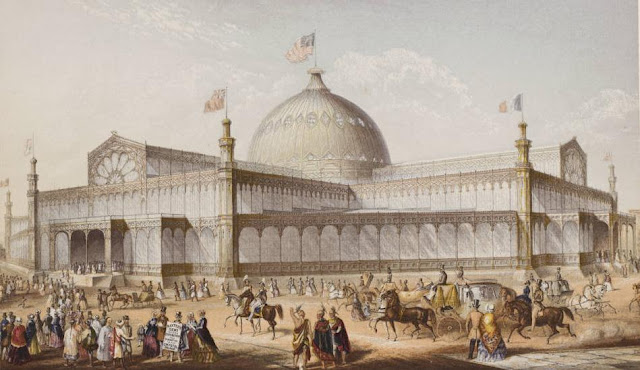 On July 14, 1853, the "Exhibition of the Industry of All Nations" -- better known today as the Crystal Palace Exhibition -- opened in Midtown Manhattan in the small square that would one day become Bryant Park.

Spurred on by London's similar exhibition that showcased the industrial might of the British Empire, the American version of the fair supposedly focused on "all nations" In fact, it was a way for America to show off its growing prominence to the world.

Probably the most famous exhibitor was Elisha Graves Otis, who demonstrated one of the 19th century's most important inventions: the elevator safety brake.


The idea of the elevator was not new; since antiquity, hoists and pulleys had moved cargo. But ropes frayed and pulleys malfunctioned, which meant that there had never been a viable passenger elevator. Without elevators, commercial buildings were limited to six or seven stories, and rents diminished the farther one had to climb from the street. Otis’s invention was a mechanism to automatically stop an elevator in the event of a fall. And to show the world how much he trusted it, he used himself as the test subject.

One block north of the Crystal Palace grounds stood the Latting Observatory, with a steam-powered elevator which could take visitors up two levels. They would then, however, have to climb stairs to the top of the observatory as no one trusted an elevator to take them higher. For his demonstration Otis got inside the elevator cab, which was suspended from the top of the observatory, and called down to his assistant who—with a dramatic flourish—severed the elevator cable. The cab lurched, dropped an inch, and then shook to a halt, held in place by Otis’ new brake.

The story has, over the past 160 years, developed the mystique of legend. In Gotham, Mike Wallace and Edwin Burroughs write that when Otis's platform "reached the highest level, an assistant presented the inventor with a dagger on a velvet cushion" that he used to cut the rope. In the new book Cities are Good For You, Leo Hollis tells a version where Otis is hoisted aloft with "several barrels and heavy boxes, until [he is]... 30 feet above the heads of the throng. After a dramatic pause an assistance cut the hoists with an axe and the crowds gasped as they anticipated seeing the engineer crash to the floor."

Whether it was a dagger or an axe, it was dramatic, and hundreds of people left the observatory that day having witnessed the future. In 1857, Otis installed his patented safety break in the Haughwout china store on Broadway, and it quickly became a tourist attraction. (The store would also become famous in 1861, when Mary Todd Lincoln came to buy a new set of White House china. That's a story we cover in Footprints in New York.) 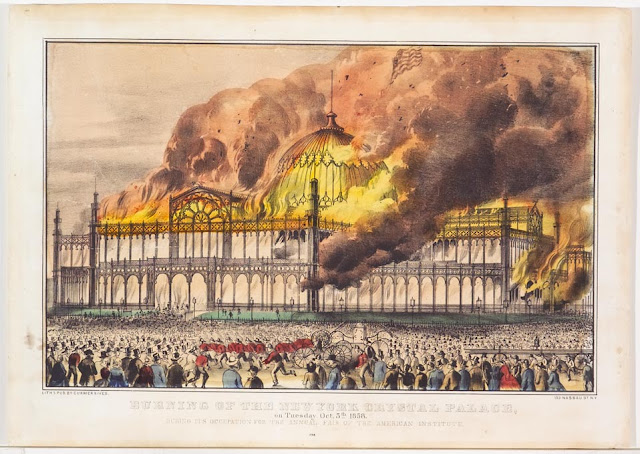 After the exhibition had closed, the Crystal Palace -- built of cast-iron, and thus thought to be fireproof -- dramatically burned to the ground on October 5, 1858.


Posted by Michelle and James Nevius at 11:04 AM