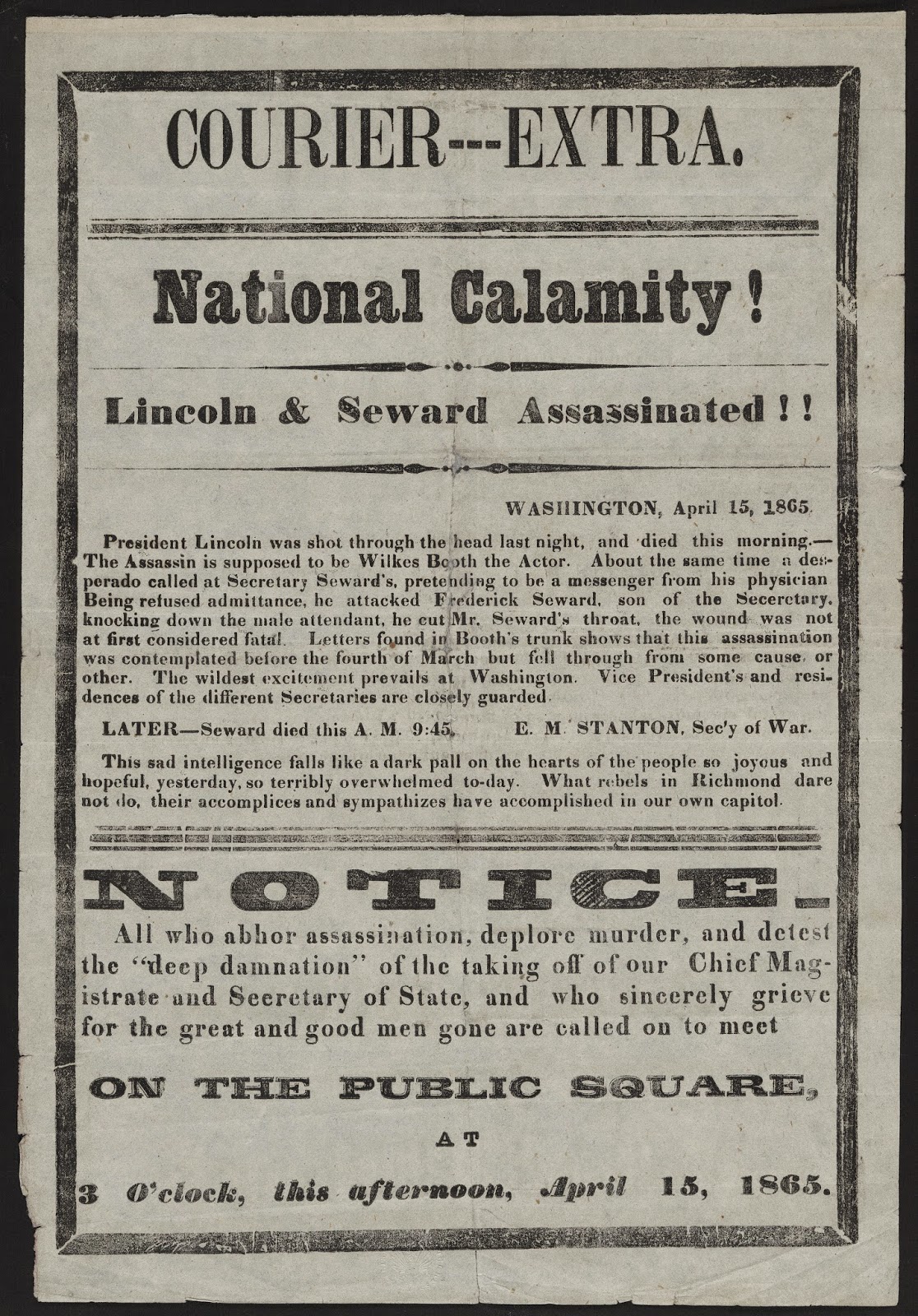 We've always found it interesting the definition of the word "assassinated" has changed so much over time. Today marks a somber anniversary -- it has been 150 years since John Wilkes Booth burst into the box at Ford's Theater in Washington, DC, and shot President Abraham Lincoln, who died the next morning. As you can see above, newspapers were reporting that both Lincoln and Secretary of State William Seward had been assassinated. This wasn't a rush to report the news that later needed to be corrected; in 1865, "assassinate" meant to attempt to kill someone for political purposes. You could be assassinated and live, as was the case with Seward.

[That doesn't excuse the report, above, claiming that Seward died at 9:45 a.m. That was just misinformation.]

In all the commemorations of Abraham Lincoln's life and death, it's easy to forget that he was not the only target that night: Booth and his co-conspirators were planning to also kill Vice President Andrew Johnson and Secretary of State William Seward.


Even though Lee had already surrendered to Grant, Booth reasoned that if they could kill the President, the Vice President, and the Secretary of State all on one night, the Union would be thrown into disarray. And, with no formal right of succession--which wouldn't be codified in the Constitution until after the Kennedy assassination--Booth might have had a point.

William Seward, best known today for his purchase of Alaska from the Russians ("Seward's Folly"), was Governor of New York from 1838-42 and Senator from 1848 until becoming Lincoln's Secretary of State in 1861. (Seward, one of the founding members of the Republican Party, had been many people's first choice to be nominated in 1860 and he received more votes on the first ballot than Lincoln. However, he did not have enough votes to gain the nomination outright and it was his eventual shift of support to Lincoln that guaranteed his rival the top spot on the Republican ticket in 1860.)

The night that Lincoln was murdered, Seward was laid up in bed. He had been in a serious carriage accident just nine days earlier that had left him close to death. One of Booth's co-conspirators, Lewis Powell (aka Lewis Paine), talked his way into the Seward house pretending that he was delivering medicine. Stopped on the stairs by Seward's son, Frederick, Powell panicked, attacking Frederick and dashing into the Secretary of State's bedroom. He stabbed Seward multiple times, injured another of Seward's sons and his bodyguard, and retreated into the night thinking he had mortally wounded the Secretary of State. It was only after Powell was captured the next day that he discovered that Seward was still alive; Seward went on to make a full recovery, continuing to serve as Secretary of State under Andrew Johnson. (Johnson was to have been assassinated that night by George Azerodt, but the would-be killer chickened out.)

Seward died in 1872 and is memorialized in New York City in a famous park on the Lower East Side as well as in a grand statue in Madison Square Park (above).

We talk much about Booth and Lincoln in Footprints in New York: Tracing the Lives of Four Centuries of New Yorkers, but if you'd like to explore Civil War-era New York, join James on Saturday, April 25, when he'll be leading a walking tour honoring Lincoln's life and commemorating his death. Read details about the tour at http://blog.insidetheapple.net/2015/04/walking-tour-saturday-april-25.html.

[Parts of this blog entry were adapted from an earlier post.]

Posted by Michelle and James Nevius at 11:23 AM