Postcard Thursday: The Evolution of the Metropolitan Museum 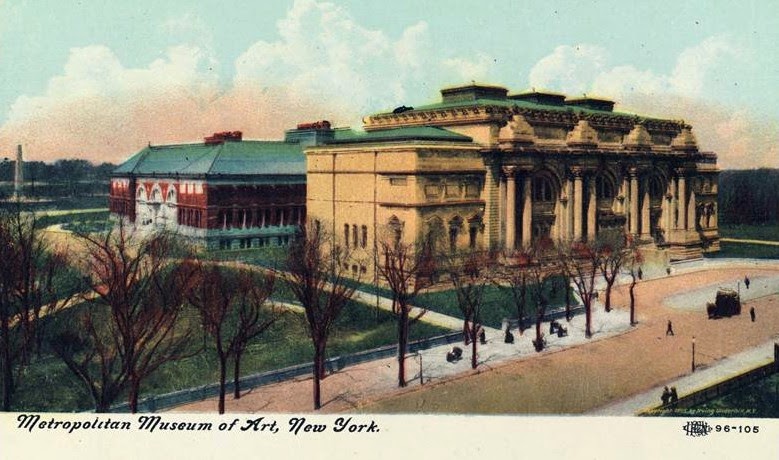 We recently added this early 20th-century view of the Metropolitan Museum of Art to our collection. This photo highlights two major additions to the museum's original floorplan: the 1888 Theodore Weston wing (in red at the back) and the Richard Morris Hunt Fifth Avenue entrance (in limestone at the front).

The Weston facade is often mistaken for the original entrance to the building. However, as the photo (below) shows, the squat 1880 Vaux and Mould building that was the original museum had a rather quaint staircase leading up to its main entrance, which in those days faced into Central Park.

Pieces of this Vaux and Mould building are still visible inside today's museum. The Central Park facade seen here in the left side of the photo is now where the Lehman Wing begins. The Weston addition was designed to harmonize with Vaux and Mould's work. You can judge for yourself by visiting the European Sculpture Court, where Weston's south facade is entirely preserved.

Hunt's 1902 addition shifted the museum's entrance to Fifth Avenue. Notice in the postcard the blocks of stone atop the colonnade that spans the facade. Those were destined to become large statues that were never carved and the rough-hewn limestone blocks still sit there, unfinished, to this day. Also notice that at the far left of the postcard is Cleopatra's Needle, which was erected in 1881, and has recently been restored.


To see how the museum has grown over the past 135 years, the Met has put together this terrific 38-second video:


(Can't see the video embedded above? Go to http://youtu.be/7oJrJJoTSaI.)

Posted by Michelle and James Nevius at 11:46 AM