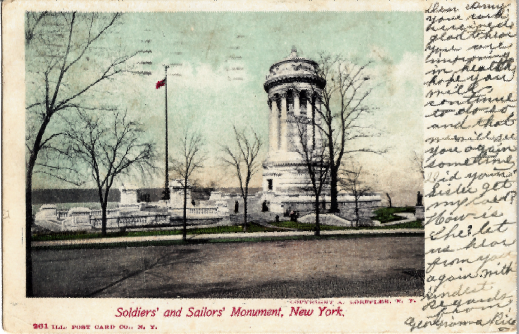 Today's postcard shows the Soldiers' and Sailors' Monument in Riverside Park; the card was mailed February 13, 1905, less than two years after the memorial had opened.

Based on the Lysicrates monument in Athens (as are many Beaux-Arts structures in New York, including the towers atop the San Remo apartment building), the memorial was designed by Charles and Arthur Stoughton, who won a public competition for what was to be the city's major memorial to the Union Army. (It has, however, always been eclipsed by that other Civil War monument in Riverside Park: Grant's Tomb.)

The monument was opened Memorial Day 1902. A parade of Union Army veterans marched up Riverside Drive, where they were greeted by President Theodore Roosevelt who presided over the dedication. Yet, just two years after this postcard was sent, the monument was already in bad shape. On March 27, 1907, the New York Times reported the structure was "in such bad repair" that marble was in danger of falling at any time. Indeed, three marble slabs had already crashed down. Renovations were made in the 1930s, again in the 1960s, and today the Riverside Park Conservancy is hoping to raise $5.5 million for additional repairs.

As you can see, the message is crammed into the narrow white border on the card's right side. This reads:

Your card received. Glad you are improving in health. Hope you will continue to do so and that we will see you again sometime. Did your sister get my card? How is she? Let us hear from you again.

With kindest regards from


As we've noted before, postcards sent before 1907 could only have the address on the back, so whatever white space was left on the picture side was used for the message. In this case, a relatively wide border allowed Georgianna Rice to fit in a message longer than the usual, "Received your card."

Posted by Michelle and James Nevius at 3:35 PM