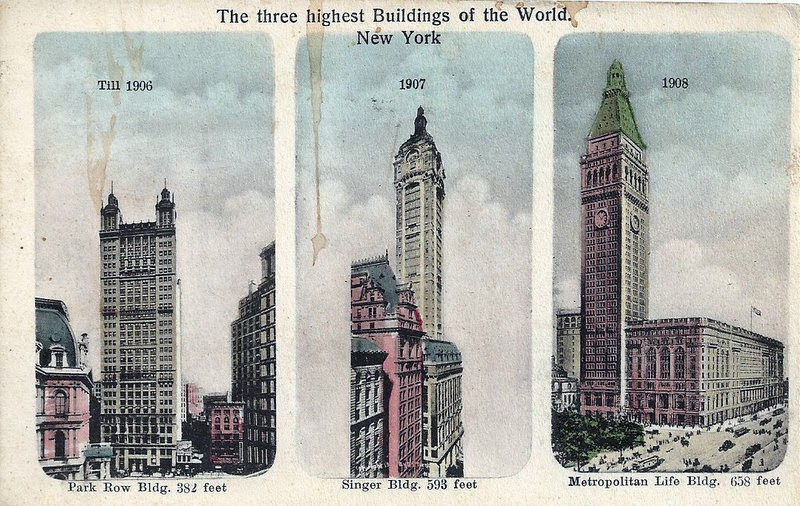 This 1908 postcard shows New York's early love affair with the skyscraper--and the the ongoing quest by developers to construct the tallest building in the world.

The tower on the left is the Park Row building, finished in 1899. Designed by R.H. Robertson, it held the title of world's tallest until the opening of the nearby Singer tower (center) in 1907.

This image doesn't do the Singer Building justice--we'll include some great images of it in a future Postcard Thursday. It was a singular building, designed by Ernest Flagg, and featured the same green-and-red color scheme as Flagg's earlier work for the sewing machine company in Soho.

If the Singer company had hoped that having the world's tallest building as their headquarters would be a good marketing tool, it didn't last long. However, it did last longer than this postcard implies. When this card was printed in 1908, the tower on the right, Metropolitan Life, wasn't actually finished. That tower opened in 1909 and was the world's tallest until the Woolworth Building was completed in 1913.

The Singer Building has a sad claim to fame--it's the tallest of all the buildings to claim the title of "World's Tallest" to have been torn down for another skyscraper. It came down in the late 1960s so that One Liberty Plaza could go up in its place. Though New York had already passed its landmarking laws, the Singer Tower had not yet been designated worthy of preservation and so fell to the wrecking ball.

However, the other buildings on this card are there to see: the Park Row Building houses J&R on Park Row and the Metropolitan Life Building on Madison Square is being converted into a hotel, which will open in 2015.

Footprints in New York comes out April 15, 2014, but you can pre-order today.
Posted by Michelle and James Nevius at 11:26 AM