This year marks the 150th anniversary of modern Thanksgiving -- that is, a national holiday, celebrated yearly in November. The date moved around awhile before settling on the fourth Thursday in November during the Depression. (Congress legalized the date of Thanksgiving to eliminate it happening on the fifth Thursday of the month and thus shortening the Christmas shopping period.)

But did you know that in 1863, Abraham Lincoln actually declared Thanksgiving Day twice? 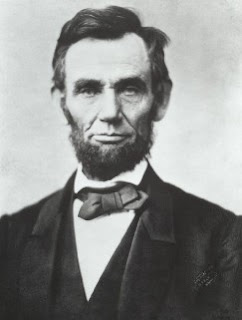 In the words of the original proclamation, issued in October 1863 and actually written by Secretary of State William Seward, the former senator from and governor of New York:


I do therefore invite my fellow citizens in every part of the United States, and also those who are at sea and those who are sojourning in foreign lands, to set apart and observe the last Thursday of November next, as a day of Thanksgiving and Praise to our beneficent Father who dwelleth in the Heavens. And I recommend to them that while offering up the ascriptions justly due to Him for such singular deliverances and blessings, they do also, with humble penitence for our national perverseness and disobedience, commend to his tender care all those who have become widows, orphans, mourners or sufferers in the lamentable civil strife in which we are unavoidably engaged, and fervently implore the interposition of the Almighty Hand to heal the wounds of the nation and to restore it as soon as may be consistent with the Divine purposes to the full enjoyment of peace, harmony, tranquility and Union.


It has pleased Almighty God to hearken to the supplications and prayers of an afflicted people, and to vouchase to the army and the navy of the United States, on the land and on the sea, so signal and so effective as to furnish reasonable grounds for augmented confidence that the Union of these States will be maintained, their Constitution preserved, and their peace and prosperity permanently preserved; but these victories have been accorded not without sacrifice of life, limb and liberty, incurred by brave, patriotic and loyal citizens. Domestic affliction in every part of the country follows in the train of these fearful bereavements. It is meet and right to recognize and confess the presence of the Almighty Father, and the power of His hand equally in these triumphs and these sorrows.


* * *
You can read more about Abraham Lincoln and the Civil War in
Inside the Apple: A Streetwise History of New York City

or in our forthcoming book
Footprints in New York: Tracing the Lives of Four Centuries of New Yorkers
(which has an entire chapter about Lincoln in New York)

Posted by Michelle and James Nevius at 12:31 PM