The Armory Show at the New-York Historical Society 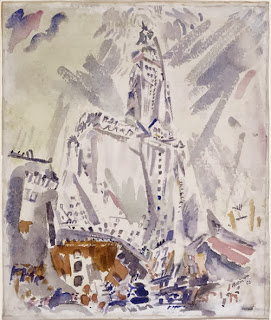 The subtitle of the new exhibition at the New-York Historical Society commemorating the centennial of the 1913 Armory show is "Modern Art and Revolution." It's worth walking through the galleries just to see how little of it seems revolutionary any more. In the hundred years since the original International Exhibition of Modern Art (as it was officially called), most of the works that were deemed shocking at the original are now looked on as staid. Marcel Duchamp's Nude Descending a Staircase is so wild that it continues to take people by surprise, but the intimate nature of this New-York Historical Society overview doesn't show it off to its best advantage.

The original armory show, held at the 69th Regiment Armory on Lexington Avenue, showcased over 1,250 works of art by both European and American artists. Today, it would be impossible to bring together all these works in one place, so the New-York Historical Society has wisely chosen to highlight a few key works, focusing not just on the famous European pieces, but also on the American artists who made up a large portion of the show.

This gives visitors the opportunity to spend time with works by Ashcan school painters like Ernest Lawson, Robert Henri, and John Sloan, whose McSorley's Bar is a highlight. Other Americans like George Bellows are well represented, as are lesser-known figures like John Marin, whose Woolworth Building, No. 31 (above) is terrific.

The museum is using timed tickets for entry, but we went on two successive Friday nights (when the museum is pay what you wish) and were handed tickets to walk right in. Maybe it will get busier over the next few months, but for now it seems like the timed tickets weren't necessary.

If you are interested in the moment when "modern" art took New York by storm, this show is well worth checking out. You can read more (much more--it's an extremely comprehensive website) at http://www.nyhistory.org/node/562/online.

Posted by Michelle and James Nevius at 12:18 PM