Terror of the Soul: Edgar Allan Poe at the Morgan Library 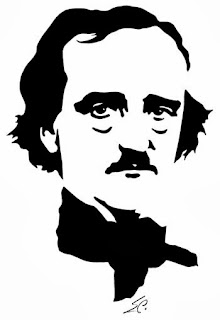 Today marks the 164th anniversary of the mysterious death of Edgar Allan Poe. Born in Boston in 1809, Poe died in Baltimore on October 7, 1849. A former resident of that city, he was only passing through on his way home to New York (he lived in the Bronx near Fordham University) when he was found "rather the worse for wear" and "in great distress." Poe appeared not to have bathed in some time; his hair was dirty; his eyes were "vacant." He was wearing an ill-fitting suit--maybe it wasn't even his own.

What had happened to him?

That's just one question we actually touch on in the Poe chapter of our new book, Footprints in New York: Tracing the Lives of Four Centuries of New Yorkers, which comes out in April. (It's already available on Amazon.com for you early birds.)

But while you wait for the book to come out, you can go up to the Morgan Library & Museum to check out their new Poe exhibition, "Edgar Allan Poe: Terror of the Soul," which opened this past Friday and runs until January 26, 2014.

The exhibit pairs Poe's early manuscripts with first editions, drawings, photographs, and works by some of the many authors that Poe influenced. Like many exhibits at the Morgan, it's a small show, but entertaining for anyone interested in seeing poems and stories in the master's own hand. (Alas, you can't go today to commemorate Poe as the museum is closed on Mondays.)

Also interesting: today's installment of the "Page-turner" at The New Yorker, which investigates whether some stories attributed to Poe's brother, Henry, are actually by Edgar himself.

Posted by Michelle and James Nevius at 2:55 PM