A Man's World at the Metropolitan Playhouse 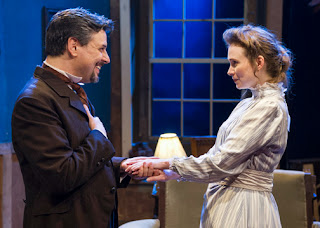 As many of you know, we're big fans of the work they do at the Metropolitan Playhouse in the East Village (and not just because they sometimes ask us to come speak to the audience after the plays).

The Metropolitan showcases forgotten gems of the American stage, many of which are linked to New York history. Running now through October 13, A Man's World by Rachel Crothers is just such a play and well worth checking out. The acting is stupendous, the sets are wonderful, the direction is spot on -- but what's really fascinating is how Crothers evokes the joys and perils of bohemian life in Greenwich Village at the turn of the twentieth century. Written and set in 1909, the play throws together a group of stock bohemians in a boarding house (probably one very similar to the so-called "House of Genius" on Washington Square where Willia Cather, John Dos Passos, and Stephen Crane all lived.)

Residents in the house include a couple of painters, a playwright, a composer who makes money give "$5 violin lessons for $1.50," an opera singer, and Frankie Ware, a female novelist who's struggling to raise her foster son while fending off critics who think that such strong prose must be written by a man. Her relationship with another boarder, newspaper publisher Malcolm Gaskell, is also the subject of much gossip. The conflicts between modern liberal attitudes and old-fashioned social mores is gripping, and--since the play was written amidst the world it critiques--a real eye-opener as to the sentiments of the time.

You can read more and buy tickets at http://metropolitanplayhouse.org/amansworld.


Posted by Michelle and James Nevius at 3:32 PM