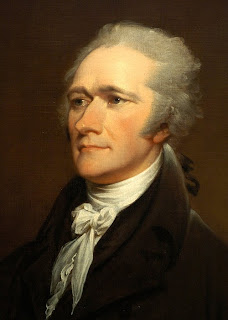 On July 11, 1804, Alexander Hamilton and Aaron Burr were rowed across the Hudson River so that they could shoot at each other. This, in 1804, seemed like a fine way to settle one's differences.

In our new book, Footprints in New York: Tracing the Lives of Four Centuries of New Yorkers (Lyons Press), one chapter concerns the duel:

If you want to know more about our new book's release, please sign up for our not-at-all-spam-like newsletter by sending "SUBSCRIBE" to info@insidetheapple.net. We'll be doing lectures, special walking tours, and more in the spring to celebrate.

* * * *
Read more about the American Revolution and Alexander Hamilton in
Footprints in New York: Tracing the Lives of Four Centuries of New Yorkers

And, of course, Inside the Apple is available at fine bookstores everywhere.
Posted by Michelle and James Nevius at 11:02 AM