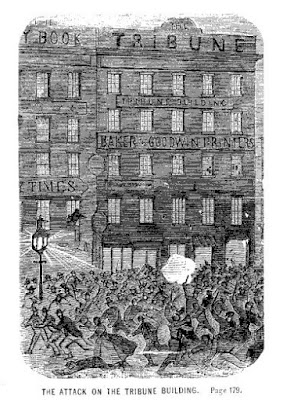 July 13, 1863--the first day of the Civil War Draft Riots--saw the attack on the draft office, the Colored Orphan Asylum, and houses of wealthy Republicans, including Mayor George Opdyke. (The attack on Opdyke's house didn't amount to much since it was one of the few places in the city protected by federal troops.)

But before we can get to the events of July 14, there was one final event on the first day of the riots that stretched through the evening into the second day: the attack on Horace Greeley's Tribune.

The Tribune was the most outspoken Republican paper in New York and Greeley--who would later go on to run for president in 1872--was one of the founding members of the party. (Indeed, it was Greeley who championed the name "Republican" in print for the new political faction.)

Throughout the day, Greeley and his managing editor, Sidney Gay, argued about whether or not to arm themselves. Greeley was adamantly opposed and when he was then urged to leave the Tribune's offices on Newspaper Row, he is said to have replied: "If I can't eat my dinner when I'm hungry, my life isn't worth anything to me."

Once Greeley had finally gone home for the day, Gay and other staffers began to arm the building. As journalist Joel Tyler Headley wrote in his 1873 survey Great Riots of New York, 1712-1873:


All day long a crowd had been gathering in the Park around the City Hall, growing more restless as night came on. The railroad-cars [ED: streetcars] passing it were searched, to see if any negroes were on board, while eyes glowered savagely on the Tribune building…. [T]he Park and Printing-house Square* were black with men, who, as the darkness increased, grew more restless; and "Down with it! burn it!" mingled with oaths and curses, were heard on every side.
At last came the crash of a window, as a stone went through it. Another and another followed, when suddenly a reinforcing crowd came rushing down Chatham Street*. This was the signal for a general assault, and, with shouts, the rabble poured into the lower part of the building, and began to destroy everything within reach. Captain Warlow, of the First Precinct, No. 29 Broad Street [joined forces with] Captain Thorne, of the City Hall [Precinct]….. Everything being ready, the order to "Charge" was given, and the entire force, perhaps a hundred and fifty strong, fell in one solid mass on the mob, knocking men over right and left, and laying heads open at every blow. The panic-stricken crowd fled up Chatham Street, across the Park, and down Spruce and Frankfort Streets, punished terribly at every step. The space around the building being cleared, a portion of the police rushed inside, where the work of destruction was going on. The sight of the blue-coats in their midst, with their uplifted clubs, took the rioters by surprise, and they rushed frantically for the doors and windows, and escaped the best way they could.

This ended the heavy fighting of the day, though minor disturbances occurred at various points during the evening. Negroes had been hunted down all day, as though they were so many wild beasts, and one, after dark, was caught, and after being severely beaten and hanged to a tree, left suspended there till [Police Commissioner] Acton sent a force to take the body down. Many had sought refuge in police-stations and elsewhere, and all were filled with terror. 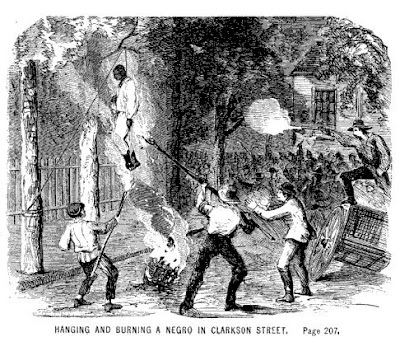 The second day of the riots, July 14, saw the intensification of attacks on black New Yorkers, and a number were lynched. As Barnet Schechter notes in The Devil's Own Work:


The pillaging of entire black neighborhoods that had begun the previous night continued on Tuesday. On Sullivan and Roosevelt Streets**, where blacks lived in great numbers, boardinghouses, a grocery, and a babershop burned down since they either were owned by blacks or catered to them. Some blacks were chased all the way to the rivers and off the ends of piers.

New York's governor, Horatio Seymour, arrived in the city that day and called for calm, but to little effect. Seymour, an anti-war Democrat, met with other high-ranking Democrats at the St. Nicholas Hotel on Broadway to determine the best course of action. What he did not do was to call on federal officials to declare martial law. While state militia troops were augmenting the police force, the federal army in New York was tasked solely with guarding military and federal installations, such as the custom house on Wall Street and Castle Clinton in Battery Park.

Violent clashes continued throughout the day, despite Seymour's efforts to send emissaries to calm the mob. As night fell, a group of rioters attacked Brooks Brothers, then located on Catharine Street on the Lower East Side. Not only was it a preferred clothier of the well-to-do, it also provided uniforms for the Union army. As Headley notes:


[S]oon from the crowd arose shouts, amid which were heard the shrill voices of women, crying, "Break open the store." This was full of choice goods, and contained clothing enough to keep the mob supplied for years. As the shouts increased, those behind began to push forward those in front, till the vast multitude swung heavily towards the three police officers. Seeing this movement, the latter advanced with their clubs to keep them back. At this, the shouts and yells redoubled, and the crowd rushed forward, crushing down the officers by mere weight. They fought gallantly for a few minutes; but, overborne by numbers, they soon became nearly helpless, and were terribly beaten and wounded, and with the utmost exertions were barely able to escape, and make their way back to the station. The mob now had it all its own way, and rushing against the doors, burst bolts and bars asunder, and streamed in. But it was dark as midnight inside, and they could not distinguish one thing from another; not even the passage-ways to the upper rooms of the building, which was five stories high. They therefore lighted the gas, and broke out the windows. In a few minutes the vast edifice was a blaze of light, looking more brilliant from the midnight blackness that surrounded it.

As the second day of the riots ended and the body count grew, the great unanswered question that hung in the air was: would tomorrow be better--or worse?