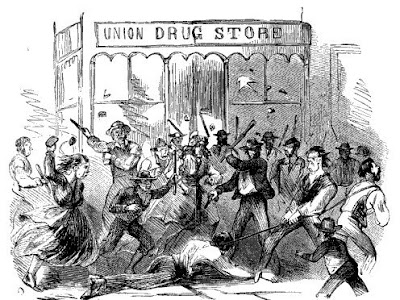 Wednesday, July 15--the third day of rioting--proved to be the pivotal day in the confrontation. Had the rioters made more headway on Wednesday, the city could have fallen into utter anarchy and chaos. Instead, it was anarchy and chaos that worked in the favor of the beleaguered police officers and soldiers protecting the city. Each day the nameless "mob" spread out around Manhattan to destroy property and kill and injure black New Yorkers, but because the rioters had no real leaders and no thought-out plan, most mob actions were short lived. Like so many explosions, they burned bright, caused a lot of damage, and soon fizzled out

Wednesday dawned hot. Many New Yorkers, fearing the city was about to fall to the rioters, spent the day trying to get out of town, clogging the Hudson and East River piers and flooding north out of the city toward the Bronx and Westchester County.

The police, many of whom had barely slept in 48 hours, tried to keep pace with the rioters. The police headquarters on Mulberry Street was connected via telegraph to the precincts for instant communication. Throughout the riots, police repair crews were constantly working on the telegraph lines in a vain attempt to keep information flowing in and out of the central command post, which was run by Police Commissioner Thomas Acton.

In The Volcano Under the City, an anonymously written 1886 book that purports to be the first "true" account of the draft riots, the author writes:


In many respects, Wednesday was, to the Metropolitan Police, the most trying day of the riot. All of them were weary, and many of them were more or less injured. Some had succumbed to their exertions under intense heat, and others required all their pluck and sense of duty to keep their wearied bodies up to their work. They had been on duty night and day, with rapid marches and with much hand-to-hand fighting against strong and desperate men. Well might President [aka Commissioner] Acton shout, as he did, with mingled humor and enthusiasm, from the front of the Central Office, to column after column of the men he was so proud of, as he hurried them off to their arduous and perilous errands:

"Go on, boys! Go on! Give it to them, now! Quail on toast for every man of you, as soon as the mob is put down. Quail on toast, boys!"

What kept Wednesday from being the worst day of the riot--and kept the riots from escalating--was the city's ability to protect its munitions. J.T. Headley, the other Nineteenth-century source for information about the riots, notes:


At about two o'clock in the afternoon word was received that a large number of muskets were secreted in a store on Broadway, near Thirty-third Street; and Colonel Meyer was ordered to proceed thither, with thirty-three soldiers belonging to Hawkins' Zouaves, and take possession of them. Reaching the place, he found a large mob gathered, which was momentarily increasing. He, however, succeeded in entering the building, and brought out the arms. An Irishman happening to pass by in his cart, the colonel seized it, and pitching in the guns, closed around it, and moved off.

The worst confrontation of the day took place on Wednesday evening. A regiment of soldiers under the command of Colonel Cleveland Winslow was sent to disperse the rioters who'd gathered at First Avenue between 18th and 19th streets. The Volcano Under the City describes the scene:


No sooner did the detachment make its appearance and undertake its appointed task than it was assailed by a dense mob in front, and by showers of missiles from the houses, including a brisk discharge of pistols and musketry. The fire from the mob in front instantly betrayed something like organization, for it was by volleys, given at the word of command. Here, at least, the rioters went into action under competent leadership, such as might have secured successes for them at many other points. Colonel Winslow and his men stood their ground courageously….Ten rapid rounds of grape and canister tore through the masses of the mob and hurtled along the wide avenue. The slaughter was horrible, and the ground was momentarily cleared; but not so were the buildings on either side. The actual number of killed and wounded cannot be estimated with any accuracy, but there were rows of bodies on the pavement for about two "blocks." The fire from the houses grew hotter, and Colonel Winslow saw that he must retire…. Every tenth man of the entire command was down, and others were falling fast, not to mention those who were disabled more or less by minor hurts. It was literally "decimated," and more than that, before it could escape. The military made good the retreat, and the mob was left in triumphant possession of the battle-ground.


Then, at 11:00 p.m., a second wave of soldiers descended on First Avenue under the command of Captain Putnam. Headley writes:


Putnam immediately charged on the crowd in the street, scattering them like a whirlwind. He then turned his guns on the buildings, and opened such a deadly fire on them that they were soon cleared. Having restored order, he halted his command, and remained on the ground till half-past twelve.

What most of those fighting did not know was that reinforcements were on the way. Late on Tuesday, Mayor Opdyke had telegraphed Secretary of War Edwin Stanton in Washington requesting that New York's militia companies--fresh from winning the Battle of Gettysburg--be sent to the city to quell the riots. As the violence calmed for the night on Wednesday, those militia companies were fast approaching the city. By daybreak, they would be on Manhattan and the riots would soon be over.