Thought I'd Seen Some Ups and Downs: Bob Dylan Arrives in Greenwich Village 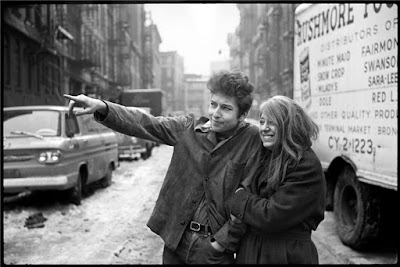 As we've blogged about before, Bob Dylan -- Nobel Laureate and towering figure in American popular music -- arrived in Greenwich Village either on January 23 or 24, 1961.

As we write in Footprints in New York, Dylan


grew up in the tight-knit Jewish community in Hibbing, his mother’s hometown. After graduating high school in 1959, he enrolled at the University of Minnesota but only lasted one year. While he was there, he tapped into the burgeoning folk scene and began consistently using the stage name Bob Dylan. Having been a rock and roller, Dylan’s musical trajectory changed around this time when he was introduced to the music of Woody Guthrie, which, in Dylan’s words, “made my head spin.”


Singer-songwriter Fred Neil presided over the bar’s eclectic all-day lineup. Dylan showed his chops by backing up Neil and singer Karen Dalton on the harmonica and was hired to “blow my lungs out for a dollar a day.”

Read the entire Dylan chapter in
Footprints in New York: Tracing the Lives of Four Centuries of New Yorkers

Posted by Michelle and James Nevius at 10:56 AM