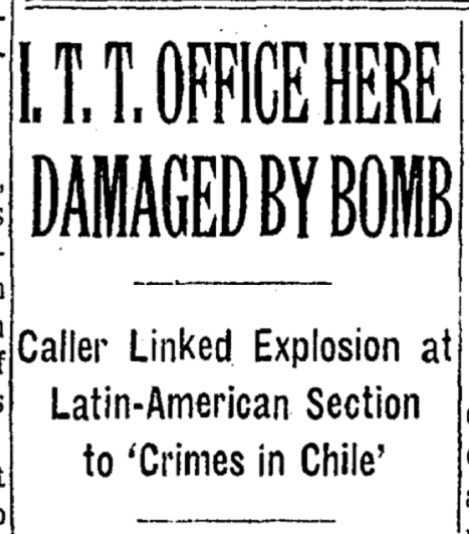 In the early morning hours of September 28, 1973, a bomb exploded at the ITT (International Telephone and Telegraph) Building at 437 Madison Avenue. A few minutes before the explosion, a caller who identified himself as a member of the Weather Underground phoned to warn the company of the bomb and to let them know it was a protest against ITT's role in the coup earlier that year in Chile.

No one was injured, though that was not normally the case with Weather Underground bombings. Since 1969, a series of robberies, bombings, and "National Actions" by the Weathermen, as they came to be known, had targeted what the members saw as corrupt government practices. In 1970 alone, there had been over 25 bombings or attempted attacks, many of them in New York City. Perhaps most famously, on March 6, 1970, the townhouse on West 11th Street that Weathermen were using as a bomb factory blew up, killing three of the bomb makers. (Kathy Boudin and Cathy Wilkerson would escape, becoming fugitives.)

That Greenwich Village explosion did not set the Weather Underground back; in fact, bombings increased. On June 9, 1970, the New York City Police Headquarters was bombed; on March 1, 1971, the Weathermen placed an explosive device in the US Capitol to protest US military action in Laos; on May 19, 1972 (Ho Chi Minh's birthday), the Pentagon was attacked -- and these were just the most high-profile cases.

ITT had been founded in 1920 after the purchase of telephone interests in Puerto Rico and Cuba. The company expanded greatly over the next fifty years, but continued to have a strong Latin and South American presence, including owning 70% of the Chilean telephone company. Alarmed at Salvador Allende's government (and likely facing the loss of the monopoly on Chilean communications), the company helped finance Pinochet's military coup. In retaliation, the Weather Underground bombed both 437 Madison (a 1967 skyscraper by Emory Roth and Sons) and ITT's headquarters in Rome, Italy.

You can read more about the bombing at https://nyti.ms/2fAPsJA.

By 1976, the Weather Underground had reorganized and most violent actions stopped, though Kathy Boudin -- who had fled the 1970 Greenwich Village townhouse explosion -- was part of the 1981 Brinks truck robbery at the Nanuet Mall near Nyack, New York in which two police officers and a security guard were murdered. Paroled in 2003, Boudin now teaches at Columbia University's School of Social Work.

Posted by Michelle and James Nevius at 12:06 PM