Postcard Thursday is a little late again; let's just say it's been a long week -- and certainly a historically unprecedented one.

With Donald Trump's election to the presidency on Tuesday, he becomes only the second person born and bred in New York City to be sent to the Oval Office.

The first was Teddy Roosevelt, born on East 20th Street in a house that no longer stands, but which is commemorated by the Theodore Roosevelt Birthplace Historic site.

Roosevelt was a popular figure during much of his public life, as shown in these fascinating New Year's cards. The one at the top, for 1906, says "Friede auf Erden, den Menschen ein Wohlgfallen," which means "Peace on Earth, Goodwill Toward Men."

The three men pictured, Roosevelt, the Russian Czar, and the Japanese Emperor, had recently negotiated the end of the Russo-Japanese War, for which Roosevelt would win the 1906 Nobel Peace Prize.

But why is the message in German? If you have any thoughts, please put them in the comments. 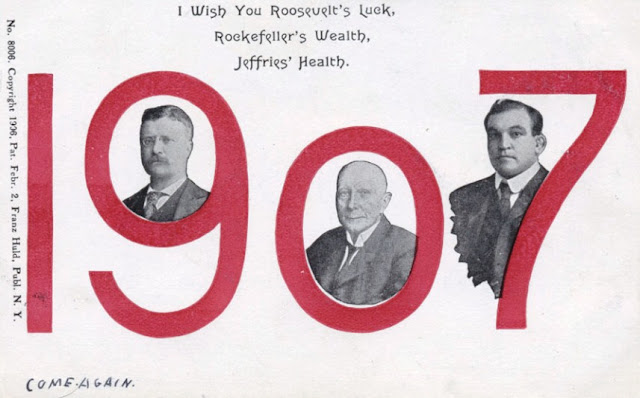 A year later, the same company issued its 1907 card, again featuring Teddy Roosevelt, but this time with John D. Rockefeller and prizefighter James Jeffries. Roosevelt had a reputation for getting out of tight spots--even before the famous 1912 assassination attempt against him.

Today, the tradition of sending New Year's cards has waned (even Christmas cards are slowly becoming a piece of history), but perhaps it's due for a revival. What three faces would you choose for a 2017 postcard?

Posted by Michelle and James Nevius at 11:42 AM