In honor of the historic win by the Chicago Cubs last night -- breaking a 108-year drought -- here are some baseball cards that date back to the last time the Cubs were national champions. 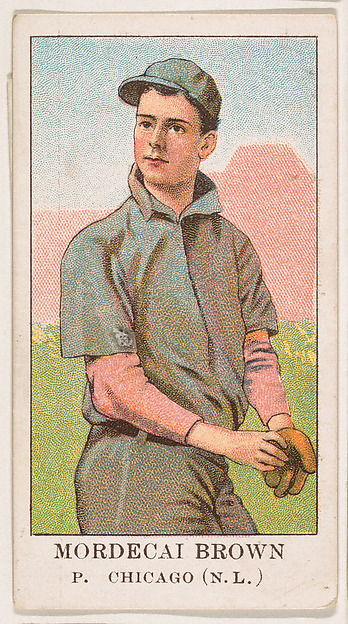 Mordecai Peter Centennial "Three-Finger" Brown was the Cubs' star pitcher. Born in 1876 (hence his second middle name), he had lost two fingers in a farming accident and as a result, pitched an incredible and rarely hittable curveball.

At the end of the 1908 season, it was Brown on the mound when the Cubs beat the New York Giants to win the pennant and thus advance to the World Series, where they beat the Detroit Tigers in five games. It was their second World Series win in a row, and little did the Cubs or their fans know how long it would take for them to be basking in the limelight again after another championship season.

This cards are part of a huge collection of vintage baseball cards held at the Metropolitan Museum of Art. There are almost always some of the cards on view in the American wing. You have less than two weeks to enjoy the current exhibition, "The Old Ball Game: New York Baseball 1887-1977."

Posted by Michelle and James Nevius at 11:57 AM