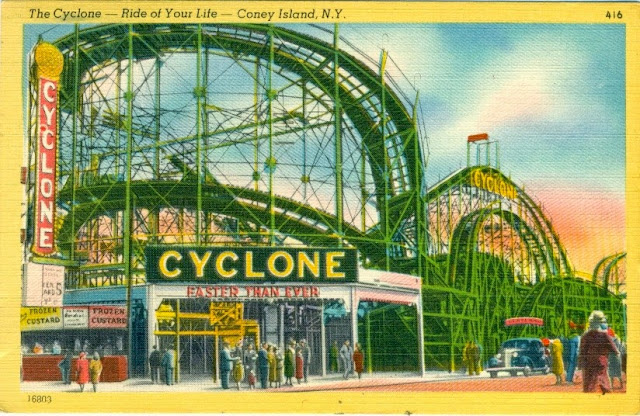 The Cyclone at Coney Island is one of the world's most famous wooden roller coasters, but it was not the first such ride at the amusement parks that lined the boardwalk out there. In fact, the first roller coaster ever built, the Gravity Pleasure Switchback Railway, opened at Coney Island in June 1884. (Sources differ as to whether it opened on June 6 or today, June 16). 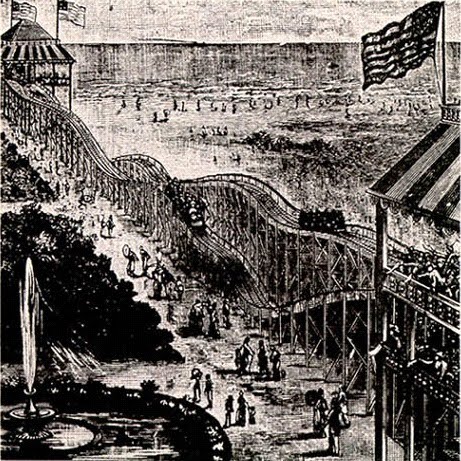 As Thompson built more rides, he improved their technology adding such features as cable pulleys to haul the cars to the top, linked cars to create longer trains, and emergency brakes in case of accident. Though Thompson didn't hold the patent on the original roller coaster,** by the end of his life he had patented more than 30 improvement to the ride and is still known to this day as the "Father of Gravity."

* The ferris wheel -- normally the best place to get a view at an amusement park -- was not invented until the 1893 Chicago World's Fair.

** The patents for the first roller coasters were issued in 1872 and 1878; however neither of the original patentees ever built a working model, making Thompson's ride the first of its kind.

Posted by Michelle and James Nevius at 1:05 PM