Postcard Thursday: The Ferris Wheel at the 1964 World's Fair 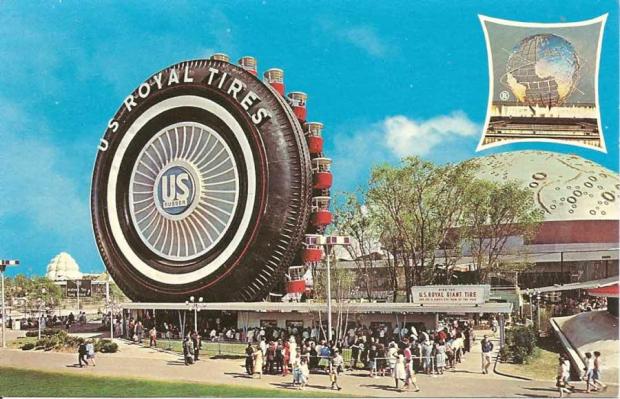 While the movie Tomorrowland hasn't lived up to box office expectations, it does feature a wonderful sequence at the beginning at the 1964 World's Fair in Flushing Meadows. The scenes -- a mix of on location and CGI -- feature a number of real locations from the fair (including Disney's Carousel of Progress and "It's a Small World"), but alas, not one of our personal favorites: The Uniroyal Ferris Wheel.

Ferris wheels were first introduced at the World's Columbian Exposition in 1893 in Chicago, the so-called "White City" World's Fair, and soon became a staple of amusement parks. To showcase its products outside the Travel and Transportation pavilion (where the Queens Zoo is now located), the Uniroyal Tire Company erected an 86-foot-tall Ferris wheel emblazoned with its logo and then-name "US ROYAL." As at many carnivals and fairs, the Ferris wheel was a hit in that it gave fair-goers a great view of the fairgrounds from the top. According to a 1997 article in the Detroit News, dignitaries such as the Shah of Iran and Jackie Kennedy rode the wheel on their trips to the fair.

After the fair's closing in 1965, the wheel was dismantled and shipped back to Michigan, where it was reassembled (sans gondolas) next to Uniroyal's sales office. Though that office later moved, the wheel remains. We snapped this picture last year: 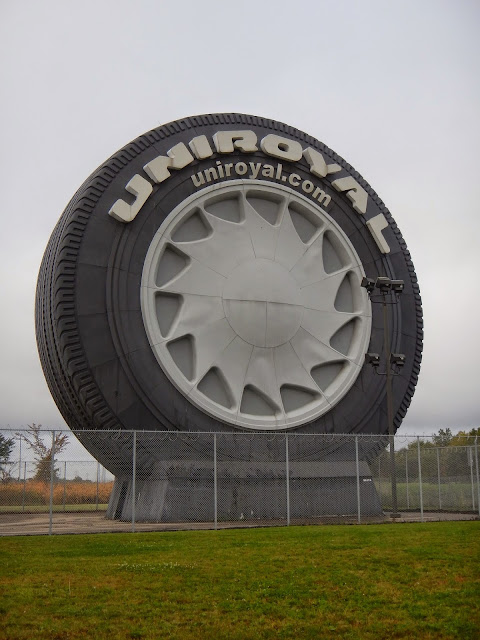 While the wheel is today just a roadside oddity, it also serves as a reminder of the far-reaching marketing potential of these fairs. How many of the 51 million people who visited Flushing Meadows chose Uniroyal Tires after seeing this?