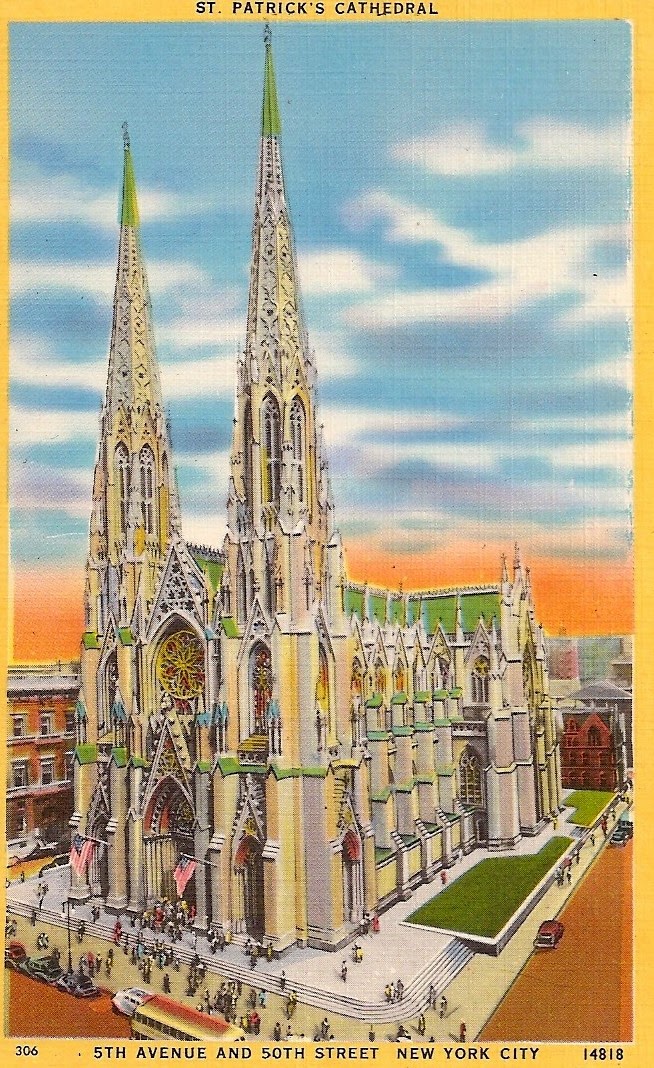 Though you can't see it on this classic linen postcard view of St. Patrick's Cathedral, the church features magnificent front doors: 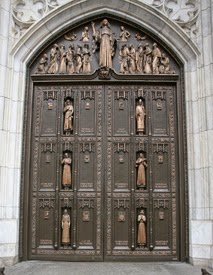 ... and one of the figures on those doors is Saint Elizabeth Ann Seton, whose was born on August 28, 1774, which makes her America's first-born saint (not the first American to be sainted). 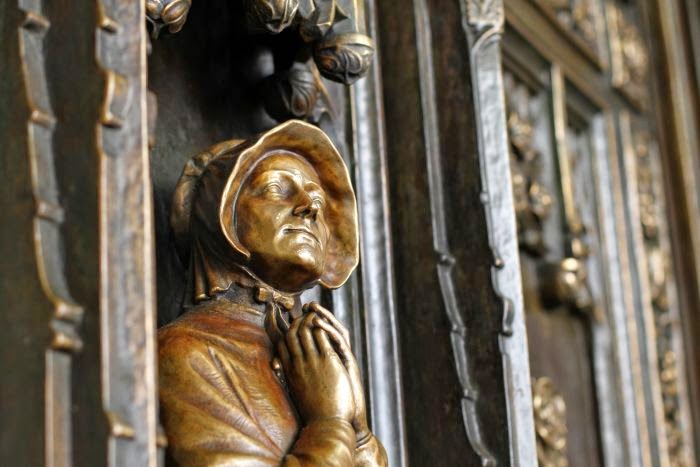 Born Elizabeth Ann Bayley, Seton was the daughter of Columbia College’s renowned professor of anatomy, Richard Bayley, and a member of the de rigeur Episcopal parish, Trinity. In 1794, the Episcopal Bishop of New York officiated at her marriage to merchant William Seton and in 1801, the Setons moved into a waterfront house on State Street near the Battery. However, William Seton’s health was failing and just two years later the family moved out, embarking on what they hoped would be a restorative trip to Italy.

Sadly, William died in Pisa shortly after their arrival. Rather than turn right around (for what was an exceptionally long sea voyage), Elizabeth stayed in Italy for a few months grieving—and discovering the Catholic Church. After returning to New York the next year, she began seriously considering conversion and in 1805 she was received into the Catholic faith—much to the chagrin and embarrassment of her friends and relatives.

Had Elizabeth contented herself to be privately Catholic, it perhaps wouldn’t have mattered so much, but soon her sister-in-law came to her with an interest in conversion. When that happened, Elizabeth’s family began threatening to have powerful allies in the state legislature kick her out of New York for proselytizing. (Or so the story goes—they never followed through.) Elizabeth didn’t give them the satisfaction; instead, she moved to Baltimore in 1808 to open a school and then founded America’s first convent, the Sisters of Charity, the next year. She died at the convent in Emmitsburg, Maryland, in 1821. In 1963, she was beatified by Pope John XXIII, and in 1975, she was elevated to sainthood for her posthumous miracles, making her the first American-born saint.

Though there is a shrine to Saint Elizabeth Ann Seton on the site of her State Street home, her house is no longer standing. The house next door (which is part of the shrine) dates from 1790s and is one of the oldest left in Manhattan.

Posted by Michelle and James Nevius at 12:04 PM