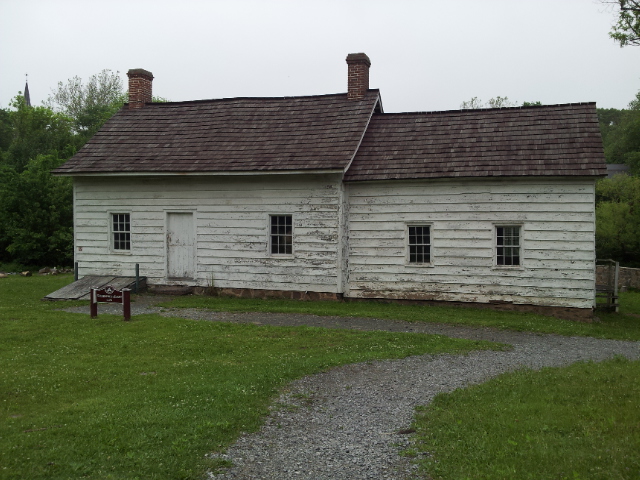 This summer, we snapped the above photo during a visit to Historic Richmond Town, Staten Island's remarkable collection of colonial and early American architecture. That's the Kruser-Finley house, which was built around 1790 and is one of only four houses in Richmond Town built in the eighteenth century. The house, originally located in nearby Egbertville, was built as one room. Two additions were made in the nineteenth century, and it probably served as a house/shop/workshop for various craftspeople, including a cooper (barrel-maker).

Alas, on Wednesday around 4:30pm, the house caught fire. Though the blaze was extinguished in an hour, most the house was lost: the interior was gutted and roof is now completely gone. Though the investigation is still on-going, it has been deemed "suspicious."

If you've never had the chance to visit, Historic Richmond Town is well worth the trip. Located in the middle of Staten Island, it was the county seat of Richmond County before Staten Island was annexed into New York City. More than 25 significant historic buildings -- some relocated to the site, others original to the town -- are scattered around the property. Though you can walk the streets on your own, the only way to really see the buildings up close is on a tour, which will generally take you inside three or four historic houses.

Posted by Michelle and James Nevius at 11:01 AM