Torn in Two: The 150th Anniversary of the Civil War at the Grolier Club 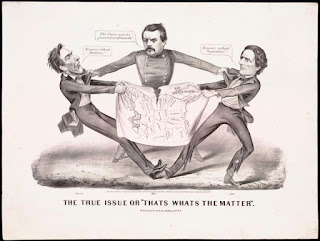 The Grolier Club (47 East 60th Street) is currently hosting Torn in Two: The 150th Anniversary of the Civil War, an exhibition of contemporary maps, broadsides, photographs, and documents organized by the Norman B. Leventhal Map Center of the Boston Public Library. The exhibit is small--it takes up just one room on the club's ground floor--but provides a fascinating glimpse into the attitudes and reportage of the time.

The exhibition pulls the viewer in immediately: the first case shows the first American demographic map (based on the 1860 census), which records the percentage of slaves relative to the population in each slave-holding county. In some counties near the Mason-Dixon line, that percentage was close to zero; in other counties in the Deep South and Texas, it reached nearly 90%. Lincoln evidently spent a great deal of time studying the map, and in a later portrait of him signing the Emancipation Proclamation, a copy of the map can be seen in the background.

For anyone interested in the Civil War, which the exhibition notes is still the most important moment in our nation's history, this jewel of an exhibition is a must-see.

For more on the Civil War--and New York's role in it--be sure to check out
Inside the Apple: A Streetwise History of New York City
Follow us on Twitter -- Facebook -- or subscribe via email
Posted by Michelle and James Nevius at 8:00 AM