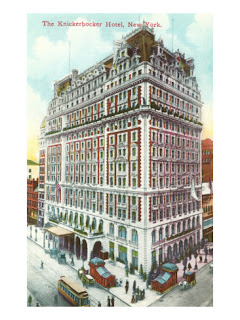 The other day, the New York Post reported that work is finally underway on the old Knickerbocker Hotel on 42nd Street. According to the article, the Knickerbocker, which was turned into office space years ago, will once again become a luxury hotel.

The Knickerbocker was built by John Jacob Astor IV in 1906, and soon became a hot spot in the city. The bar, known as the Forty-Second Street Country Club, not only featured a free lunch, but also one of the most talked-about paintings in the city, Maxfield Parrish's Old King Cole. The massive mural depicts John Jacob Astor IV as Old King Cole. Taking a look at the painting, you can see that the king and his attendants are all making odd faces. According to lore, this is because Parrish was in a contest with other painters to see who could be the first to depict the act of someone passing gas. Evidently, Parrish won.

Also according to legend, the bartender at the Forty-Second Street Country Club, Martini di Arma di Taggia, invented the Martini at the Knickerbocker for John D. Rockefeller. When Rockefeller found the gin in the drink too harsh, he allegedly took an olive from a dish on the bar and plopped it in the drink. (In order for this story to be true, we must forget that the recipe for the martini prototype, the Martinez, was published in a bartender's guide twenty years before the hotel opened.) 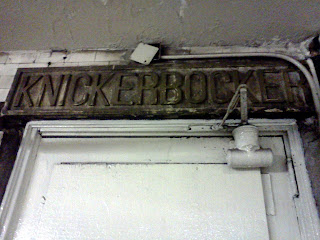 The Knickerbocker opened just two years after the completion of the first line of the IRT subway, and as one of its amenities, there was a private entrance to the hotel from the 42nd Street subway station. This entrance is still there--if you go down to the shuttle stop--which is the only part of the Times Square station that is original--you'll see the sign for the Knickerbocker emblazoned above a door in the corner. You don't suppose they'll reopen this when the new hotel is finished, do you?
By the way, the Old King Cole mural left the Knickerbocker when the hotel was converted to offices, bouncing around New York until it found a home at the St. Regis, where it can be seen today.

Read more about the birth of Times Square/42nd Street in
Inside the Apple
You can also follow us on Twitter, Facebook, and have this blog sent to you via email.
Posted by Michelle and James Nevius at 11:36 AM