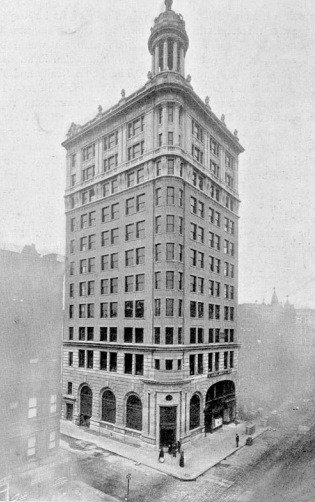 A couple of days ago, it was reported that the Jarmulowsky Bank Building at 54 Canal Street—once the tallest building on the Lower East Side—has finally sold. It was purchased by DLJ Real Estate Partners for $36 million, who are likely going to turn it into a hotel.
The bank, completed in 1912, was not only the tallest building in the neighborhood, but served as a symbol of the Lower East Side’s prosperity. The bank’s founder, Sender Jarmulowsky, was born in the Russian empire (in what is now Poland) in 1841. Orphaned at age three, Jarmulowsky was originally on track to become a rabbi, but he had other ideas. In 1868, he and his new (and wealthy) wife moved to Hamburg to start a passenger ship ticketing business.

The ticket business was simple: Jarmulowsky would purchase blocks of steerage tickets and then sell them on credit to Eastern European Jews eager to escape the increasingly harsh conditions of czarist Russia. Because Jarmulowsky could buy tickets in bulk and do so when prices were at their lowest (tickets were good for up to one year), he could make a profit while selling tickets at their high-season prices.

In 1873, Jarmulowsky emigrated to New York and established a ticket business on the Lower East Side—with a staff that spoke Yiddish and Russian—so that New Yorkers could buy passage for relatives in Europe. By 1878, Jarmulowsky had set up shop at the corner of Canal and Orchard streets; because so much money was flowing through his business, Jarmulowsky’s soon became an outright bank.

In 1912, the current Jarmulowsky Bank building was erected by the firm of Rouse & Goldstone, who are best-known for their apartment buildings, including Marjorie Merriweather Post’s massive digs at 1107 Fifth Avenue. It is rumored that the cupola (which, alas, is now gone) was added to Rouse & Goldstone’s original plans in order to make certain the bank was taller than the nearby Forward building.

At the height of his career, Sender Jarmulowsky was beloved in the neighborhood. He was the founding president of the Eldridge Street Synagogue and (in the words of one local Yiddish newspaper) “living proof that in America one can be a rich businessman but also be a true, pious Jew.”

Jarmulowsky died in 1912, soon after the building’s opening. His sons Henry, Louis, and Meyer took over their father’s operation. Because the passenger ship ticketing side of the business was increasingly difficult to run (big steamship companies began insisting that people purchase passage directly from them), the sons began investing the bank’s deposits in real estate. Though Sender Jarmulowsky had always been able to weather financial panics, his sons could not. When World War I broke out, nervous investors tried to pull their money—money the Jarmulowskys didn’t have. On August 4, 1914, the state took over the Jarmulowskys’ holdings, causing panicked investors to riot in front of 54 Canal Street. Over 3,000 depositors marched on City Hall, where some were beaten and arrested by police. A month later, a smaller mob marched on Meyer Jarmulowsky’s apartment building on Fort Washington Avenue, causing the banker to flee out his fourth floor window, over the rooftop to an adjacent building, and down to a waiting taxicab below. Such shame was brought on the family, that later generations changed their name to Jarmel and Jarmuth.

The bank never occupied more than the lower few floors of the building; the upper floors were designed to be garment factories, which they remained until the last decade. Though the building has been vacant for a few years, there were until recently still sweatshop exhaust pipes peeking out of some of the upper windows.
* * *
Read more about the history of the Lower East Side in
Inside the Apple

Posted by Michelle and James Nevius at 9:11 AM