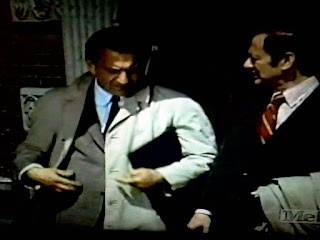 When we heard yesterday that Jack Klugman would be returning to the stage in Twelve Angry Men (he is the only cast member from the original 1957 film still living), our thoughts immediately turned to Klugman's most famous role--that of New York City sportswriter and notorious slob Oscar Madison in The Odd Couple.

Based on Neil Simon's hit play and film of the same name, the television show ran from 1970 to 1975. Klugman played opposite Tony Randall's Felix Unger, a photographer and neat freak. Though produced on a sound stage,* the opening credits were filmed on location around New York, and like many shows of that era, they provide a glimpse into the city of the time.


* Season one was filmed on the movie's set; subsequent seasons were in front of live audience  in Hollywood.
The two men live in Oscar's apartment at 1049 Park Avenue, from which they are seen emerging in the opening credits (above). A coop building from 1919, it hasn't changed much over the years, though we doubt Felix and Oscar were paying $8,100 a month rent (which at least one apartment is currently going for). Even adjusting for inflation, that would be about $1,500 in 1970, which still seems high. In the fourth season episode "The New Car"--filmed partly on location in New York--the characters inexplicably move to Central Park West and 74th Street, presumably into the San Remo.

Oscar is a writer for the New York Herald; the only problem with this is that the Herald had gone out of business in 1924, purchased by its rival the Tribune. (As the New York Herald Tribune, it continued publication until 1966; the International Herald Tribune is still in business.) The Herald was published from a wonderful Stanford White building on Herald Square, which is also gone. In the credits, we see Oscar getting out of a taxi in midtown, near Times Square. 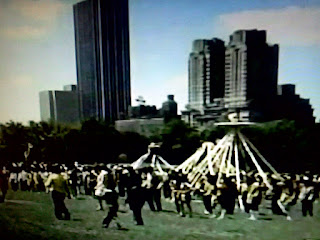 Perhaps the best part of the original credits shows Felix and Oscar learning to dance at a maypole celebration on Sheep Meadow in Central Park. In the background the Century (25 Central Park West) and the old Gulf and Western building (now Trump International Hotel) loom over them.

We'll be back before the ball drops to wish you a Happy New Year, but in the meantime, hope you are having a wonderful Hanukkah, that you amaze your friends with feats of strength tomorrow at Festivus, that you have a Merry Christmas, and a wonderful Kwanzaa.
Michelle and James Nevius
www.insidetheapple.net