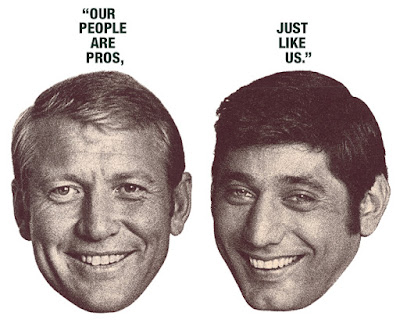 Would you hire a temp from these guys?
In 1968, the ad agency Lois Holland Callaway thought so. Deciding that the time was right to diversify (and that New York was always filled with people looking for work), Lois Holland Callaway launched an employment agency.
To be the public face of the company, they picked Yankee great Mickey Mantle and Jets quarterback Joe Namath and named the new venture Mantle Men and Namath Girls. It seemed like a winning bet: the telegenic Mantle had already appeared in commercials for the company, including a well-known spot for Maypo cereal ("I Want My Maypo...I Want It!") and Namath was arguably the most famous sports figure in New York. The pair did personal appearances to hype the company, appeared in all of the print ads, and even made television commercials (a first for an employment agency). Soon, Mantle Men and Namath Girls had a dozen offices in the city and the suburbs; within a year it was the second-largest employment agency in the world. 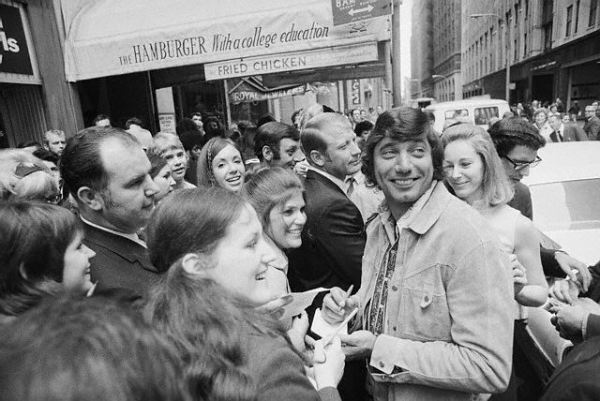 (c) Bettmann/CORBIS
What the company didn't count on was a souring economy. According to George Lois, one of the company's founders, the recession of 1969--the worst since the Korean War--killed the venture. While more people out of work meant more business in the short term, it also meant fewer jobs, and Mantle Men and Namath Girls had grown too quickly to sustain itself. Lois Holland Callaway sold the company and by 1974 it had filed for bankruptcy.
The experience obviously didn't make Joe Namath shy away from advertising. In the 1970s, he went on to star in ads for Noxema shaving cream and Hanes' Beauty Mist pantyhose, which helped cement his status as a pop culture icon.
* * *

For more about New York in the 1960s, pick up a copy of our book
Inside the Apple: A Streetwise History of New York City
Follow us on Facebook, Twitter, get an RSS feed, or have these blog posts emailed to you.
Posted by Michelle and James Nevius at 8:57 AM

I found a postcard advertising this agency in an old library book today! That's how I happened upon this post; serendipity strikes...