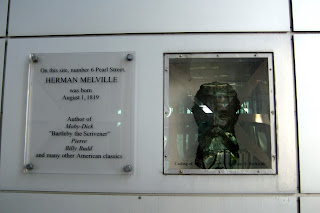 
"There now is your insular city of the Manhattoes, belted round by wharves as Indian isles by coral reefs—commerce surrounds it with her surf. Right and left, the streets take you waterward…. Circumambulate the city of a dreamy Sabbath afternoon. Go from Corlears Hook to Coenties Slip, and from thence, by , northward. What do you see?—Posted like silent sentinels all around the town, stand thousands upon thousands of mortal men fixed in ocean reveries."

-- Herman Melville, Moby Dick
One hundred and sixty years ago, on November 14, 1851, Harper & Brothers published Herman Melville's Moby Dick. Now considered one of the great pieces of American literature, it was a commercial and critical failure when it came out. (A fire at the warehouse in 1853 destroyed the bulk of Melville's unsold works, making a first edition a real rarity today.)

If you happen to be downtown today, you can celebrate Melville by visiting his birthplace--or, more precisely, by visiting a plaque in the wall. Melville was born on August 1, 1819, in a boarding house at 6 Pearl Street, a building which is now gone. Melville's father, Alan, was climbing the ladder of success, but in 1819 this once-fashionable neighborhood was rapidly declining as piers and warehouses were built to accommodate New York's role as America's biggest port.

Finding the Melville birthplace can by tricky. It is tucked away in the plaza behind 17 State Street. If you are on State Street, cut through between 17 State and the Church of Our Lady of the Rosary, and you'll see Melville's bust on the far wall.

(And if you can't down to Pearl Street, you can celebrate Moby Dick in pictures here.)

Read more about Herman Melville's Manhattan in
Inside the Apple: A Streetwise History of New York
To subscribe to this blog, visit this link.  Or follow us on Twitter.
Posted by Michelle and James Nevius at 11:53 AM