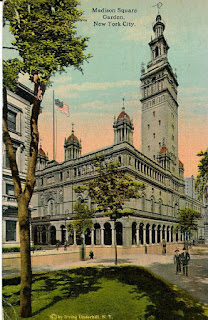 On June 16, 1890 -- one hundred and twenty years ago today -- the second, and arguably most famous, of the arenas to bear the name Madison Square Garden opened for business. Designed by famed architect Stanford White, it was New York's biggest entertainment venue and is still considered by many to be one of the greatest buildings of the Gilded Age.

The first venue to be called Madison Square Garden opened on Madison Avenue and 26th Street in 1874. Originally named the "Monster Classical and Geological Hippodrome," it was run by P.T. Barnum in a converted railroad freight building. In 1879, William K. Vanderbilt renamed the building Madison Square Garden, using it as a velodrome as well as a site for boxing matches and other sporting events. However, the building was open air and was torn down in 1888 so that an enclosed arena could go up on the spot.

Stanford White's Garden, which opened two years later, essentially contained four theaters: the main amphitheater, with seating for 8,000 (and plenty of additional standing room), a concert hall, a 1,200-seat theater for plays, and a rooftop garden and cabaret. It was this last theater that became most famous when it was the site of the "crime of the century": White's murder in June 1906 during a performance of Mam'zelle Champagne. 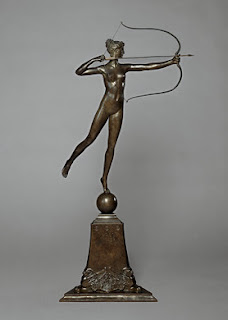 The Garden's 32-story Moorish tower was originally topped with an 18-foot statue of Diana by Augustus Saint-Gaudens. Made of bronze and weighing 1800 pounds, the statue was designed to be weather vane that spun in the wind. White and Saint Gaudens soon had second thoughts about this and the statue was removed to be sent to the 1893 Columbian Exposition in Chicago (where it was eventually destroyed in the fire that engulfed the fair grounds). A lighter, fixed, 12-foot version of Diana was then set atop the Garden, where it stood until the building was demolished in 1925. That Diana now resides at the Philadelphia Museum of Art, though a copy is also at the Metropolitan Museum.

When White's Garden had been built, Madison Square was still in the center of the city's entertainment district, with theaters stretching from 14th Street up Broadway to 38th Street. However, with the creation of a new Broadway theater district centered around Times Square in the early 20th century, Madison Square Garden suddenly began to seem too far downtown and in 1925, the Garden moved to Eighth Avenue and 50th Street. That building was, of course, subsequently replaced by the current Garden that was built after the destruction of Charles McKim's Penn Station in 1964 (the other crime of the century).

Interested in more Stanford White architecture? Grab a copy of Inside the Apple and download our walking tour of White's architecture.

Read more about Stanford White and Madison Square Garden in
Inside the Apple: A Streetwise History of New York City.
To get RSS feeds from this blog, point your reader to this link.
Or, to subscribe via email, follow this link.