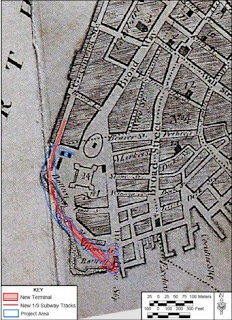 If you are in Grand Central any time between now and July 5 and you have a few minutes to spare, it's worth your while to check out the new exhibition at the Transit Museum's gallery. The show, titled "Where New York Began: Archaeology at the South Ferry Terminal," explores some of the 50,000 artifacts unearthed during the building of the new South Ferry subway station.

When an 18th-century portion of the old Battery wall* was unearthed in 2005, it made headlines around the city. Less talked about, however, was the trove of artifacts uncovered during the excavation, including fragments of building materials and lovely tile and ceramics, some of which date back to the Dutch Colonial era. While only a small portion of the finds are on view at Grand Central, the well-laid out exhibition takes viewers through all the different types of finds that archaeologists discovered at the site, including more recent relics, like a soda bottle and remnants of the original subway station.

* Portions of the wall itself are on view in Castle Clinton in Battery Park.

Read more about Battery Park -- from the Dutch Colonial era to the present --
in Inside the Apple: A Streetwise History of New York City.

To get RSS feeds from this blog, point your reader to this link.
Or, to subscribe via email, follow this link.
Also, you can now follow us on Twitter.
Posted by Michelle and James Nevius at 11:54 AM