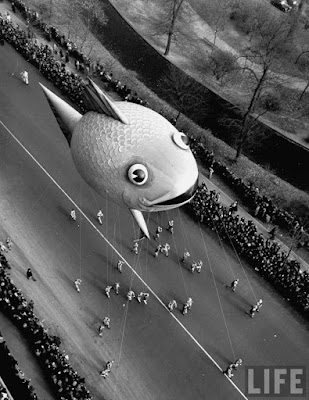 Like millions of people across the country, we’ll be watching the annual Macy’s Thanksgiving Day Parade (from the comfort of our living room, courtesy of dueling parade coverage on NBC and CBS).

Some fun facts about the parade’s early years:

·         When it launched on Thanksgiving Day in 1924, the parade began at 145th Street and Convent Avenue in Harlem. The parade wended its way almost six-and-a-half miles down Convent, Morningside, and Manhattan Avenues to 110th Street where it jogged over to Broadway and turned south. At Columbus Circle the parade moved over to the Eighth Avenue as far south as 40th Street before heading back over to Broadway to finish at Herald Square. (The parade was inaugurated to celebrate the expansion of Macy’s into the 12-story Herald Square store, which had opened just three months earlier.) They moved the start of the parade route to 110th Street a few years later and to the Museum of Natural History in the 1940s. The parade now covers about 2.4 miles.


·         The parade, which has featured Santa since its inception, was known as the Macy’s Christmas Parade until 1935.


·         Prior to the first parade, the New York Times reported that Santa would be accompanied by “a retinue of clowns, and prominent personages in toyland, such as Mother Goose, Little Red Riding Hood, Little Miss Muffet and the Three Men in the Tub.” In its post-parade coverage, the Times notably changed that to a “retinue of clowns, freaks, animals and floats.” The animals, according to Macy’s own website, came from the Central Park Zoo. No mention is made of where the freaks came from.


·         The parade was condemned in certain circles for interfering with Thanksgiving morning worship services and, as a result, Macy’s moved it to the late afternoon in the late 1920s. It slowly inched its way back to being a morning parade by the outbreak of World War II. (The parade went on hiatus for three years during the war, with the money that would have been spent on the parade sent to the war effort instead.)


·         The first helium balloons were introduced in 1927. The Times referred to one as a “human behemoth” and another as a 60-foot “dinosaur” (both in quotes). There were also balloons of “lions, tigers, monkeys, giraffes and occasional cannibals.” The cannibals were evidently part of a Robinson Crusoe float.


·         The next year, the store released five balloons into the air at the end of the parade. Those who found them could return them to the store for a $100 prize. Three of the balloons came down in Queens; a fourth landed in the East River and was pursued by tugboats; the fifth—a ghost—was last seen heading out to sea over the Rockaways. After a couple of near misses with airplanes, Macy’s stopped releasing balloons in 1933.

Photo courtesy of the new Life magazine photo archive over at Google.