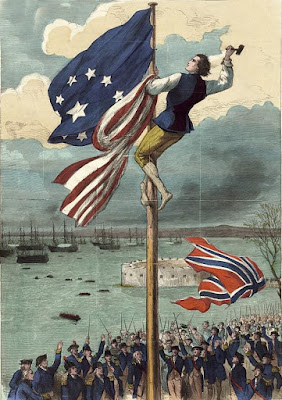 Before we get to Thanksgiving (which will be the subject of a future post), we have another holiday coming up next week: Evacuation Day. So, break out the red, white, and blue, because Tuesday marks the 225th anniversary of the end of the Revolutionary War.

Even if you’re a bit fuzzy on your dates, you probably remember that the war ended with the Battle of Yorktown, which took place in Virginia in October 1781. However, despite the British surrender and the subsequent ratification of the Peace of Paris, British troops refused to leave their headquarters in New York City. (The British commander, Guy Carelton, was reluctant to leave due to the large number of Loyalist refugees that had come to the city following the British surrender. Many of those refugees eventually ended up settling in New Brunswick, Canada.)

To end the occupation once and for all, George Washington returned to New York on November 25, 1783, for the first time since he had lost Manhattan to the British in 1776. That morning the British troops pulled out of the city, sailing from the Battery through the Narrows. (Supposedly the last shot of the Revolutionary War was fired in anger at the shore of Staten Island.) Once the British had gone, Washington and his commanders marched into the city.

However, the British had left at least one insult behind. Someone had run a Union Jack up a flagpole, cut the halyard, and greased the pole so that when Washington arrived he’d still see the British colors flying over the city. It was up to a young sailor named John van Arsdale to rectify the situation. Using nails, he created cleats on the side of the flagpole and managed to carry a Stars-and-Stripes up to the top of the pole and replace the Union Jack before Washington’s arrival. (The somewhat fanciful depiction above is a later commemoration of the scene. Notice the fort directly behind the flagpole; that appears to be Castle Clinton in Battery Park, which wasn’t built until 1807 for service in the War of 1812.)

In the early part of the 19th century, Evacuation Day was celebrated with some fervor in New York City, but as the war passed into memory and many of its veterans died, the holiday lost its following. In 1863, Abraham Lincoln proclaimed the last Thursday in November to be a day of Thanksgiving and the modern tradition of Thanksgiving was born. With this holiday following on or near Evacuation Day, New York’s local holiday fell by the wayside. (Compare this to Patriot’s Day in Massachusetts, which commemorates the start of the Revolution and is still going strong.)

There are couple of places you can go to celebrate Evacuation Day. The first is Fraunces Tavern on Pearl Street. This is the reconstructed version of the tavern where Washington had his final headquarters after his triumphant Evacuation Day return to the city. The tavern still operates a bar and restaurant as well as a fascinating small museum.

Nearby on Wall Street, a statue of Washington graces the front of Federal Hall National Memorial. Though the statue is there to commemorate a later event (Washington’s inaugural in 1789), it was erected on Evacuation Day.

In Union Square, take a look at the magnificent equestrian statue of Washington that stands at the 14th Street end of the square. This statue, by Henry Kirke Brown, is meant to depict Washington riding into the city on Evacuation Day.

To read more about New York’s role in the Revolution, feel free to go ahead and pre-order a copy of Inside the Apple, which will be published in March 2009.

Read more about Evacuation Day in
Inside the Apple: A Streetwise History of New York City.

Posted by Michelle and James Nevius at 4:16 PM