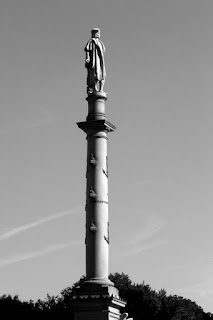 Monday, October 14, marks the 74th year that Christopher Columbus' "discovery" of America has been celebrated as a national holiday. In New York City, celebrations date back to at least 1792, the 300th anniversary of Columbus' voyage, but didn't really start in earnest until the first waves of Italian immigrants began arriving in the years around the Civil War.
In 1892, the 400th anniversary, New York City went all out in its Columbus celebrations. Three separate statues were planned for Central Park and--since there was already one in the park, donated by a private individual--this would have meant a total of four Columbus monuments in the park alone. In the end, we only have two Columbus commemorations: one in the middle of Columbus Circle (donated by the Italian-American community) and one on the Mall, put up under the auspices of the New York Genealogical and Biographical Society (NYG&B).
Each is worth a visit. The Italian Columbus stands on a 70-foot pillar in the midst of the traffic circle where 59th Street intersects Broadway and Central Park West. It is sculpted of marble by Gaetano Russo and the base is inset with bas relief images of Columbus' first landing.
To reach the other Columbus, enter the park here and walk north on the West Drive (the ring road) to Tavern on the Green/Sheep Meadow. Turn right and walk east along the bottom of Sheep Meadow; when you get to the other side, follow the path as it curves to the left (don't re-cross the ring road) and you'll get to base of the park's formal promenade, known as the Mall. There you'll find the other Columbus.
This work, often known as "the Spanish Columbus," is by Jeronimo Sunol, a Spanish artist who had already created a similar sculpture in Barcelona. The statue's champion was James Grant Wilson, a Civil War veteran, New York City historian, Central Park lover, and all-around civic-minded citizen. Through the NYG&B, Wilson raised the funds to place this statue in the park, probably as a counterbalance to the Italian piece in Columbus Circle. With so many Italians immigrating to the United States in the late 19th century, it is likely that the subtext of any so-called "Spanish Columbus" was that it was, in fact, a "non-Italian Columbus."
Meanwhile, the Spanish government was interested in commemorating the explorer with its own statue, but plans fell through and it was never built.
Lastly, there was the privately donated piece. It was sculpted by Emma Stebbins--best known for the park's Angel of the Waters--and ended up living for years in a tavern that once stood in the park near the 102nd Street transverse. Stebbins' Columbus later traveled down to Columbus Park in Chinatown and now stands in Cadman Plaza in front of the Brooklyn Supreme Court building. (To visit, take the 2, 3, 4, or 5 subway to Borough Hall. The Columbus Statue is directly in front of the main Supreme Court entrance.)
Much more about Columbus and his appearances in NYC history, art, and architecture can be found in Inside the Apple.
Happy Columbus Day!
* * *

Posted by Michelle and James Nevius at 10:27 PM