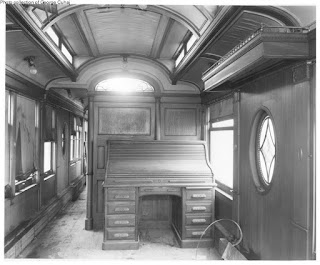 October 27 marks the 104th anniversary of the opening of New York’s first subway, the IRT. On that day, Mayor George “Max” McClellan took hold of the controls at the City Hall station and enjoyed it so much that he kept driving all the way to Broadway and 103rd Street, where the motorman was finally allowed to take over.*

(When the city celebrated the subway’s centennial in 2004, we thought it would have been great for Mayor Bloomberg to reenact McClellan’s joyride, but—alas—no such luck.)

The IRT (Interborough Rapid Transit Company) was created in 1900 to build and operate the first subway and its principal financier was August Belmont, better known today for building Belmont Park, the home of the Belmont Stakes. Part of the IRT’s first complement of rolling stock was a private car for Belmont, named the Mineola (after the family seat on Long Island).

Talk about commuting in style. While it is certain the Belmont used the car for entertaining and showing off the IRT to guests, stories have also persisted for years that the Mineola would whisk Belmont and his guests from a siding under the Belmont Hotel on 42nd Street all the way out to Belmont Park. In theory, this would have been possible (switching from IRT to LIRR tracks at Atlantic Avenue), but there is no evidence that the Mineola ever made that journey.

After Belmont’s death, the car was eventually sold for scrap. However, it never quite managed to end up on the junk heap and in 1973 was acquired by the Shoreline Trolley Museum in East Haven, Connecticut, where it remains to this day.

You can read more about Belmont and the building of the IRT in Inside the Apple.

Thank you for posting this article! my friend and i were discussing this but he couldn't remember the details. Its very interesting!