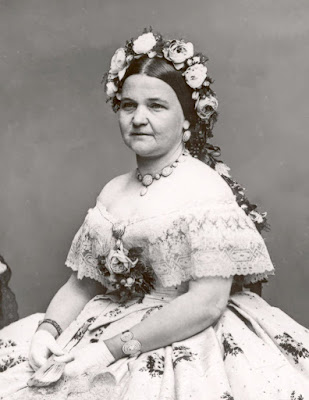 Two hundred years ago, on December 13, 1818, Mary Ann Todd was born in Lexington, Kentucky. She met Abraham Lincoln after she'd moved to Springfield, Illinois; they married in 1842.

We devote a chapter to the Lincolns in Footprints in New York, as New York and Brooklyn were important to both the president and the First Lady.

During Lincoln’s first term, he was usually stuck in Washington, DC, but Mary Todd Lincoln came to New York frequently. Mrs. Lincoln’s first trip after her husband’s inauguration was in May 1861, just one month after the attack on Fort Sumter, and seems typical of her city sojourns. Mrs. Lincoln checked into the posh, new Metropolitan Hotel at Broadway and Prince Street, in the heart of the shopping quarter. This section of Broadway south of Bleecker Street had almost everything an out-of-towner could hope for: hotels, theaters, shops, restaurants. It was the Times Square of its day, and like its modern counter- point, there were probably visitors who checked into the Metropolitan Hotel and never left the environs of Broadway and Prince Street.

Mrs. Lincoln arrived on a Saturday; the next day, she attended services at the Plymouth Church. On Monday, she shopped at A. T. Stewart’s marble palace; on Tuesday, Lord & Taylor’s was on the agenda, as well as a trip to Laura Keene’s theater, which stood on Broadway near Bleecker, just a five-minute walk from the hotel. On Wednesday, Mrs. Lincoln made what was probably her most lasting purchase: new White House china from E. V. Haughwout’s emporium at Broadway and Broome.

The next day, Mrs. Lincoln toured the Brooklyn Navy Yard; the following morning, Mrs. Lincoln inspected the “Park Barracks”—perhaps those in City Hall Park outside the Astor Hotel. Amazingly, the barracks were just about the only sign that America was at war.

Mrs. Lincoln would return to New York many times, ostensibly as shopping excursions, but also, certainly, to get away from the mounting war pressures in Washington. In the summer of 1863, Mrs. Lincoln spent four days in New York, seeing friends, and being entertained on the French frigate Guerriere. It had been less than a month since the draft riots, but Haughwout’s and Stewart’s were open for business, and the theaters on Broadway were full. It was almost as if nothing had happened.

Not only did Mary Lincoln survive the assassination of her husband, she lost two of her four sons in childhood and a third, Thomas ("Tad"), six years after Abraham Lincoln's murder. Only her eldest son, Robert, survived her--he would go on to serve as Secretary of War under presidents Garfield and Arthur.

Mrs. Lincoln died in 1882 at her sister's home in Springfield, Illinois.

Posted by Michelle and James Nevius at 12:16 PM